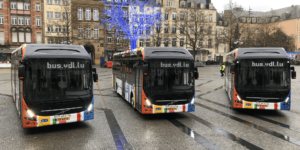 The city of Luxembourg has put ten electric buses into service. The CE 7900 E model Volvo buses will be used on routes 9 and 14, which are now exclusively electric.

In an unveiling ceremony on the 15 December, the new, fully-electric additions to the Luxembourgish bus fleet were attended by Luxembourg City Mayor Lydie Polfer, mobility Alderman Patrick Goldschmidt, the head of the city bus department Lex Bentner and Pierre Colbach, a representative of the Ministry of the Economy. The tender for the acquisition was launched last year across Europe, with Volvo winning out for the ten-bus bid.

“The City has been working to make our capital cleaner and quieter while also striving to improve the quality of public transport for passengers,” said Goldschmidt, “We have achieved an important milestone with the recent extension of the tram to Luxembourg Central Station, and will continue to work hard when it comes to the other modes of public transport, particularly the AVL buses, which operate day and night throughout Luxembourg City’s 24 districts.”

Luxembourg further plans to successively replace the rest of their combustion-engine bus fleets with electric buses between 2025 and 2030. As the public transport operator calculates, a total of 1.1 million kilometres is covered by buses on lines 9 and 14 alone each year.

This is also not the only electric bus fleet in the small European nation, as early as 2018 bus operator Emile Weber launched an electric bus fleet, which was further expanded by their subsidiary ‘Voyages Ecker’ this September.