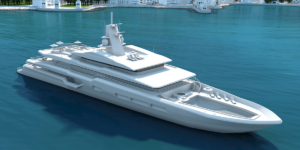 ABB has scored the debut deal with Dutch luxury yacht builder Oceanco. They will use Azipod technology to supply propulsion to a superyacht. Both partners consider this the beginning of future projects in a market ABB estimates to exceed $10 billion by 2025.

For the project at hand, ABB will supply two 2.5 MW Azipod units, together with propulsion drives and controls. The system works like a serial hybrid. A submerged pod underneath the ship’s hull contains an electric motor, which the ship’s diesel engine powers so there are no batteries. Still, ABB claims the system cuts fuel consumption by up to 20 per cent compared to traditional shaftline propulsion systems.

It is one of their most proven drives and has high manoeuvrability thanks to 360-degree rotation. Italy’s cruise ship firm Fincantieri, for example, installed the first Azipod drives in the late 1990s and recently closed a 150-million-dollar-deal with ABB for the drive. Azipod also powers ferries or tankers. The Chinese shipyard Chengxi is waiting for ABB to equip two container ships 1.9 MW Azipod units this year.

For the Oceano yacht, not much more is known other than that will be a “superyacht built to the highest sustainability standards.” Orders usually see ABB delivering all components, including generators, frequency converters, switchboards, drive transformers and a remote control system to operate the Azipod units from the bridge.

The EU parliament, in September 2020, demanded the inclusion of CO2 emissions from maritime shipping in the EU Emissions Trading Scheme to decarbonise naval transport. Future legislation will be subject to negotiations with EU member states and the EU Commission.