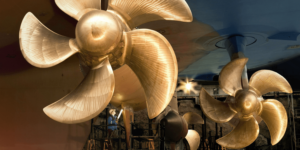 ABB has secured a contract worth around 150 million US dollars to supply the complete power and drive package for cruise ships built by Italian shipbuilder Fincantieri. The electric drives will still be powered by diesel engines, but are said to reduce fuel consumption by 20%.

ABB will equip five new ships with its Azipod electric drive. The ships, which are scheduled to be launched between 2023 and 2026, will each be powered by two Azipod units, corresponding to a total propulsion power of 178 MW – i.e. 35.6 MW or over 48,000 hp per ship.

The Azipod system consists of propeller nacelles mounted under the ship. They can be rotated through 360 degrees, thus increasing manoeuvrability. The nacelles each contain an electric motor that does not get its electricity from batteries but rather from the ship’s diesel engine. The drive, therefore, more like a serial hybrid. The system is expected to reduce fuel consumption by up to 20 per cent compared to a conventional shaft drive directly via the ship’s diesel engine.

Fincantieri already installed the first Azipod drives in the late 1990s. The current order is apparently the largest and most powerful Azipod propulsion units ever installed by the Italian shipbuilder, with 20 MW each. However, ABB also offers units with 22 MW.

ABB will also supply the complete integrated power supply system for each of the five ships, i.e. generators, frequency converters, switchboards, drive transformers and a remote control system to operate the Azipod units from the bridge. ABB has not disclosed which shipping company will use the ships when Fincantieri has completed the vessels.

Cruise ships and other large sea vessels are considered “hard-to-decarbonise” due to their overall size and long distances between refuelling opportunities. For this reason, ABB has also teamed up with HDF on fuel cell systems for ships. Recently the EU parliament demanded maritime emission control in order to accelerate the decarbonisation of marine vessels.