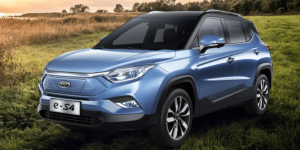 The cylindrical battery cells in the new 4680 format have first been made by Tesla with – and independently of – Panasonic. These format of cells will also be made by Tesla in the new German plant Giga Berlin.

Back to China though. The agreement signed between the two companies will run for a period of three years. CBAK will provide “customised implementation solutions for power batteries and battery packs based on the latest technical requirements of JAC Motors”. The two companies will also establish a joint research and development team to design, test, and enhance their products’ adaptability in electric vehicles. JAC Motors has committed to prioritising the implementation of those batteries and battery pack systems jointly developed by the two companies for its future productions of electric vehicles.

CBAK Energy Technology specialises in lithium batteries for electric vehicles, light electric vehicles, energy storage, and uninterruptible power supply (UPS) among other products. CBAK Energy became the first lithium battery manufacturer in China listed on the Nasdaq Stock Market in 2006. In China, the company has multiple operating subsidiaries as well as a research and development and production base in Dalian.

SVOLT cobalt-free batteries up for order