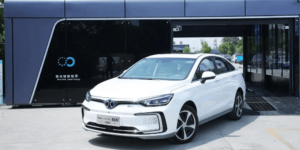 The South Korean company SK Innovation is entering the battery replacement technology business in China. This has been made possible by a strategic investment in the company specialised in battery swapping called Blue Park Smart Energy (BPSE) that is a subsidiary of the BAIC Group.

The 13.3 per cent stake in BPSE is held by SK Future Energy Shanghai (SKFS), a subsidiary of SK Innovation. “Through this investment, SK Innovation has secured the position of a key strategic investor in BPSE.”

SKI said BPSE is “a key participant” in the standardisation of China’s battery replacement technology. Blue Park Smart Energy is a “high-profile service-sharing company” in the industry, which mainly provides battery swapping services for taxis and sharing services (MaaS: Mobility as a Service). The company already operates its own battery exchange stations in Beijing.

The move into the area of scaling up battery swapping operations has been a long-prepared move. Back in 2013, SK Innovation founded a joint venture with the BAIC Group to manufacture batteries. SK Innovation says that this investment really laid the foundation for the promotion of the company’s battery service (BaaS) business in China. BaaS means Battery as a Service, and is a service industry based on EV batteries rental, charging, reuse, and recycling. SK Innovation and BPSE decided to promote cooperation in the BaaS business through a business agreement and create synergies with China’s existing battery business.

The first BaaS businesses that both companies will focus on will be the battery exchange stations themselves.

In China EV giants are onboard with battery swapping

The Chinese startup Nio (whose batteries are made by the Chinese battery-making giant CATL) decouples the battery costs from the purchase price of its vehicles. Using the ‘Battery as a Service’ offer now introduced, customers can buy the Nio ES8, ES6 or EC6 models without a battery and rent one instead.

In August last year, we reported that Nio operates 143 battery-swapping stations around China, where drivers can exchange spent battery packs for fully charged replacements. The BaaS now covers 64 cities in China, and Nio claims it completed over 800,000 battery swaps. Li added that Nio was building a new battery-swapping station in China every week and planned to build 300 new stations next year. This is a huge expansion given that Nio completed the first battery-swap corridor in January 2019.

In China, battery swapping has been much more extensively realised than in either North American or European markets, and this in both personalised as well as public and shared transport.

The Daimler group began cooperating with BJEV on second-life battery storage in mid-2019 but has since been quiet on developments in this regard. Here, cooperation partner BJEV sees itself as an “expert in areas such as charging and battery swap infrastructure and battery 2nd-life usage”. Daimler has held a minority interest in BJEV since last year. Its parent company BAIC, also a Daimler cooperation partner, acquired a five per cent stake in the German group in July. Daimler has made no mention of specifically supporting battery swapping technology, infrastructure or battery swapping standardization, but did say that Mercedes-Benz engineers will use tests and simulations to demonstrate the potential for used electric vehicle batteries for evening out fluctuation in Chinese grid systems, as well as supporting power-failure management.

Although Tesla saw the advantages of battery swapping systems. This idea was attempted in the US in 2013 when Elon Musk showed off Tesla’s battery-swapping technology on its Model S. Only four to five out of 200 Model S owners he invited to try the service out were interested and Musk did not persevere, saying “Clearly, it’s not very popular,” a little prematurely.

Other advantages of battery swapping, besides easily upgrading technology, reducing the purchase price of EVs, massively decreasing charging times is also that the battery swapping stations themselves can become independent energy storage with grid-balancing ability.

For its part, SK Innovation says that it plans to continue to discover business models and expand the business into service areas throughout the entire battery life cycle, such as battery rental, charge, reuse, and recycling. Already a big player, BPSE is a battery reuse company authorized by the Chinese Ministry of Industry and Information Technology and is specifically focussed on the whole life cycle value of the battery.

For the moment, this means the main business for SK Innovation and BAIC subsidiary BPSE is the operation of battery swap stations, R&D as well as advocating the standardization of China’s battery swap technology. But the ramifications of this infrastructure is even more far-reaching: The battery installed in the battery swap station can be used as an energy storage system (ESS), so it is expected to help build a power distribution infrastructure which also makes grid balancing possible, in regional or local contexts.

Most recently, in May 2020, China included battery-swapping development into its “New Infrastructure” campaign, which is a national project to offset the economic impact of the coronavirus pandemic and boost sustainable growth.

But SK Innovation does not only have the Chinese market in mind. Since SKI says it has the most petrol stations in Korea, the company will easily expand into Korea with battery exchange stations and energy storage systems in the future.