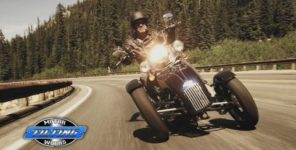 US firm Arcimoto, known for its light electric vehicles, has reached an agreement to acquire Tilting Motor Works, the creator of the TriO three-wheel conversion kit for touring motorcycles.

Under the terms of the agreement, Arcimoto will acquire Tilting Motor Works’ assets for a combination of cash and Arcimoto shares in the range of $9.25 million to $10.25 million. The transaction, which is subject to customary closing conditions, is expected to close during the first quarter of 2021.

The TRiO system from Tilting Motor Works can already adapt existing bikes, keeping their natural lean but adding stability with a second front wheel. This possibility is already offered at Harley-Davidson, Honda, and Indian models, and is priced at $14,000 plus installation.

The TRiO technology that will now be made available to Arcimoto for their range of light electric vehicles, while the technology will remain available to convert motorcycles. For this purpose, TRiO kits all come with the TiltLock levelling system, which allows the bike to stand up by itself, and eliminates the need for riders to put their feet down at lights or in stop-and-go traffic.

“I’ve been riding motorcycles my whole life, and after my first ride on the TRiO, I was blown away by how naturally and intuitively this three-wheeler leaned into every turn,” said Terry Becker, COO of Arcimoto. “This amazing technology manages to combine the added safety and stability of a three-wheeler with the one-of-a-kind ride sensation of a two-wheel bike.”

Bob Mighell, founder and CEO of Tilting Motor Works broke the land-speed record for 3-wheeled motorcycles at the 2013 Motorcycle Speed Trials held at Bonneville Salt Flats in Utah. He says: “It’s an honour to join forces with Arcimoto, a true thought-leader in the three-wheel EV space. We will continue to build our TRiO kits that make motorcycles safer to ride, and we are thrilled to begin development on new Arcimoto products that utilise our technology to create a better, more sustainable world.”

Mark Frohnmayer, Founder and CEO of Arcimoto, says that the acquisition will be a springboard for creating a whole new line of Arcimoto products “aimed at true micromobility.” He explained: “Bob and I have known each other for a long time as we have built complementary technology companies in the emerging three-wheeled vehicle space. I’m very much looking forward to working with him and his team to go full tilt for ultra-efficient transportation.”

Arcimoto is no stranger to the combination of fun, sustainability and complete practicality. The company already has a range of light electric vehicles that serve as emergency vehicles, delivery vehicles and just plain fun vehicles. These make the most of smaller, lighter vehicles to cut through traffic to get to an emergency site on time or make sure a pizza stays hot.

Arcimoto’s Deliverator and Rapid Responder vehicles support two occupants, sitting one behind the other. The Deliverator three-wheeler has a top speed of 75 mph (roughly 120 km/h) and sports a 102 mile (about 164 km) city range. Built on the modular Arcimoto Platform, the Deliverator offers 20+ cubic feet of cargo space (0.56 m2), and size that allows three vehicles to be parked in a single space.

These are not the only light electric vehicles the company is manufacturing. The company showed off its latest prototype in late 2020, which is a three-wheeler called the Roadster. It is a roofless three-wheeler with a chopped-down windshield, more like the kind of trikes riders currently use for personal mobility.

Arcimoto seems to be on a course of rapid expansion as sustainable mobility picks up speed. Earlier this month, the company announced that it has agreed to purchase a new manufacturing site in Eugene, Oregon. Spanning over 185,000 square foot (about 17,187 sqm), the new factory is more than five times as large as Arcimoto’s current production facilities. The company considers the new Eugene facility to become “instrumental in achieving mass production” of Arcimoto’s electric vehicles.