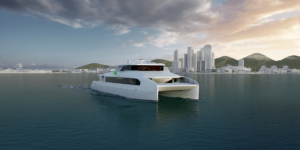 South Korea plans to replace a total of 140 conventionally powered ferries by clean alternatives by 2030. The electric ferry, which has now been launched with the help of ABB, is the first example of the planned electrification of the ferry fleet. The 40-metre catamaran ferry is scheduled for delivery in 2022 and will in future carry up to 100 passengers and five crew members between the north and south ports of Busan. With an average operating speed of 13 knots (equivalent to 24 km/h), the ship will need about one hour each for the outward and return journey.

ABB says it has been selected as the first system integrator to support the electrification initiative. For said e-ferry, the Swiss company is sending, among other things, two 1,068-kWh battery packs, a power distribution system and an energy management system. In addition, the ferry will be remotely monitored and analysed by ABB once it starts operating.

ABB says that the batteries will provide enough energy for up to four round trips before being recharged during the vessel’s nighttime stops ashore. The manufacturer does not disclose further technical details or financial key points of the contract. ABB only adds that it has also signed an agreement with Haemin Heavy Industries to collaborate on other marine projects in the future.

The maritime sector initiative is part of South Korea’s Green New Deal announced in 2020, which aims to achieve nationwide carbon neutrality by 2050. Although ABB is active in a number of sectors across transport industries, the Swiss-Swedish company has been very visibly active in the maritime sector considered hard-to-decarbonise because of the sometimes vast distances travelled with enormous loads. This includes being part of a consortium trying to further H2 technology on such larger ships, as well as numerous projects with passenger ferries and more exclusive maritime vessels such as superyachts.