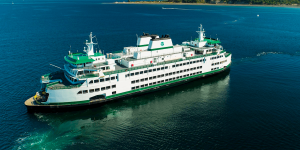 US American shipbuilder Vigor Fab has selected ABB to supply hybrid drive and battery systems for Washington State Ferries’ newest ships. The new ‘Olympic Class’ ferries can carry up to 1,500 passengers and 144 cars.

When they are delivered in 2024, the debut ferry of the new series will be the first in Washington State Ferries’ fleet to be equipped with a hybrid drive and energy storage systems. ABB will contribute the necessary drive technology and, among other things, its Onboard DC Grid power distribution system. According to the manufacturer, the new ferries can run entirely on battery power and, if necessary, in hybrid mode. The aim is to further improve climate friendliness along the supply chain by using renewable energy sources such as hydroelectric power for charging, the Swiss company said in a press release.

Washington State Ferries is based in the northwestern US state of Washington and is, according to their statement, the largest ferry shipping company in the USA. By the year 2040, thirteen of the company’s currently employed diesel ships are to be replaced by new watercraft with hybrid propulsion systems. Six ferries are also to be retrofitted with plug-in hybrid technology. Some boats can also be operated fully electrically on shorter routes, the shipping company announced. Charging devices will also be installed at many terminals in the future.

Once the fleet has been expanded to include the new hybrid ferries, Washington State Ferries is aiming to halve fuel consumption of 9.5 million gallons (about 36 million litres) in 2040 – compared to 19 million gallons (about 72 million litres) in 2018. According to the company, CO2 emissions are expected to fall below the reduction target for 2050 by 2034.

The shipping company has commissioned the US specialist company Vigor Fab to build the ship. Its Vice President Marine Fabrication, Jay Hebert, speaks of a remarkable contract: “This landmark project supports Washington State’s goal for 2050 to reduce emissions by 57.5 per cent below the emissions level in 2019, utilising a hybrid and electric propulsion solution that is space-efficient, easy to install and flexible in operation”. The basis for the project is the commitment of the Governor of Washington, the Parliament and Washington State Ferries to replace obsolete ferries with clean technologies.

ABB is a major player in the market for maritime eMobility solutions. Just a few months ago, for example, the Swiss company received an order from Genting Hong Kong to supply power, drive and digital solutions for six ‘Universal Class’ cruise ships. Aida Cruises is also flirting with battery storage systems onboard its large cruise ships, for which ABB could supply parts. In April of this year, the Group also signed a letter of intent with Hydrogène de France to jointly manufacture megawatt fuel cell systems to power overseas vessels.