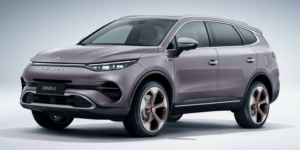 The electric car joint venture between Daimler and BYD in China with the Denza brand is apparently facing an uncertain future. According to a German media report, Daimler insiders talk about a “disaster” given the persistently low sales numbers.

As reported by the Handelsblatt, there are more and more voices in the German company that want to discontinue the Denza project. Some describe the company’s joint venture as a “strategically irrelevant cooperation” that is burning millions. Given the general market development and the new model, however, supporters believe that it is too early and that the electric SUV is a good product, just that its sales strategy is not right.

Officially, however, both BYD and Daimler stand behind the electric brand. “Daimler and BYD continue to work on the future of Denza as a domestic brand for high-quality battery electric vehicles,” Daimler said in response to a question from Handelsblatt, saying that the market performance of the Denza X also has “progressively evolved” since the product launch.

The sales figures would beg to differ. Only 14,000 units of the Denza 500 have been sold since its market launch in 2014. Even of the latest model, the Denza X, just 4,175 vehicles were delivered to dealers last year, including BEV and PHEV versions. According to the Handelsblatt, the two carmaking giants were hoping for up to ten times this number. The Denza 500 (initially called the Denza EV) is a van-like compact car, while the Denza X is an e-SUV and uses technology from the BYD Tang.

On the latter model in a more attractive market segment, Denza is now probably hoping for rising sales. Registration figures analysed by Handelsblatt now show that Denza has apparently discontinued the compact 500 without notice since there were no registrations of the model in 2020.


But the Denza X is not having an easy time of it either, partly because of its technology donor BYD Tang, which is also available as an electric car and plug-in hybrid. Mercedes has shaped the design of the model and is responsible for sales. Production is handled by partner BYD. Experts see the Denza X as a “well-made car” with a decent range of 520 kilometres according to NEDC. However, in the price segment “from 289,900 yuan (37,000 euros) for the plug-in hybrid, there is a lot of competition from brands with lower price tags, and certainly, a lot of electric SUVs on the Chinese market. The more space-appropriate market sector is being snapped up by General Motors in their SAIC GM Wuling partnership. According to the latest sales figures in China, from December 2020 – the small, affordable electric cars produced by this partnership had the highest electric sales of any other brand in China in November 2020.

At Daimler with their large BEV and PHEV SUV, some insiders seem to be taking another look at the Denza X sales strategy, which leads to another problem: the perception of the brand. So far, the Denza has only been displayed and offered at selected Mercedes dealers, which may not be the right clientele for the brand. “But the vehicle has to be positioned in an environment where it belongs – and that is not at Mercedes-Benz, but rather at BYD,” says Jan Burgard of Berylls Strategy Advisors.

According to the Handelsblatt, it is possible that such a new sales strategy is the last chance for Denza. The critics, however, are still hoping for a quick end: already with the X-Class pickup, CEO Ola Källenius has shown that he does not hesitate to discontinue unprofitable models.