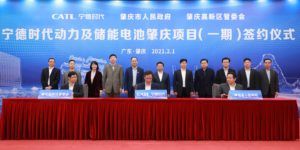 The Chinese battery cell manufacturer CATL plans another plant for its battery cells in the city of Zhaoqing. The plant, with an initial capacity of 25 GWh, was not yet included in the recently published investment plan.

CATL does not announce an exact timetable for the first phase but estimated 26 months in the past. With the experience gained so far, this period could shorten. However, CATL estimated 15 GWh of production capacity in the first stage, whereas Zhaoqing will be 25 GWh.

As is almost customary in agreements with provincial governments, CATL is not only committing to building the plant. The battery cell production will also support “related industries”, and the company will help build a cluster for the energy industry.

In January, CATL announced plans to expand its production capacities by 130 GWh in three plants in China for 39 billion yuan (about 5 billion euros). They named plants in Ningde (Fujian province), Ritsuyang (Jiangsu province) and Yibin (Sichuan). A plant in Zhaoqing was not on the list at the time – and must be added to the 130 GWh mentioned.

However, it is not surprising that CATL will continue to expand strongly: worldwide, the company wants to expand its production capacities for battery cells to 230 GWh this year and to 1,200 GWh in 2025, as recently reported.