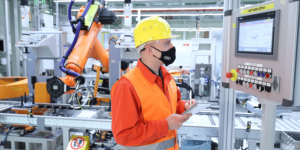 Preparations are underway at Audi Hungaria for the production of the new generation of electric motors. The new electric drives for the Group’s fully electric models, which are based on the Premium Platform Electric (PPE) developed with Porsche, will be supplied from Győr, Hungary.

The Volkswagen Group’s first electric model to be based on the PPE platform will be the new, purely electric Porsche Macan in 2022. Audi has not yet named any specific models but has already announced its intention to build electric cars based on the PPE in China from 2024 with the help of partner FAW. The Premium Platform Electric is the electric counterpart to the Modular Longitudinal Toolkit (MLB) for the large combustion models. The PPE is thus theoretically suitable for all models from the mid-size class upwards, whether as a low or high-floor version for saloons and estate cars or SUVs and sportbacks.

According to Audi regarding the Győr plant, the realisation of the PPE drive project in a three-shift system will secure the jobs of about 700 employees in the future. The German carmaker cites the fact that VR goggles were used for the first time to design a production line as a special feature in the planning of the new production area.  With this example, the company explains that the engineers can plan the production process more effectively and with more room for innovation in design with the use of the novel 3D image processing technology. This should make the production area more efficient and the workplaces more ergonomic.

In Győr, the electric motor of the Audi e-tron marked the start of e-drive production a good two and a half years ago, and production was already expanded the following year. By the end of 2020, exactly 187,163 electric drives will have been produced at the Hungarian motor plant.

“At Audi Hungaria, we are doing our own development work for electric drives and have already been producing e-motors in series since 2018. Therefore, our team has a great deal of expertise and essential experience in precise detail work,” says Robert Buttenhauser, Member of the Board of Management for Drivetrain Production at Audi Hungaria. Audi sees these conditions as being ideal for the production of the new generation of electric drives.