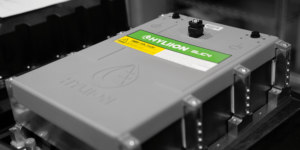 Hyliion will integrate the new battery module into the next development stage of its hybrid system and is expected to score points with a revised cooling system. The manufacturer cites “five times the cycle life of a conventional BEV battery”, higher charging rates and longer sustained power output, as well as increased safety due to a reduced operating temperature as the most important benefits of this improved cooling system. Hyliion further claims the battery can be charged “in less than eight minutes”.

The company says that the hybrid system can be installed in most Class 8 commercial vehicles, which weigh more than 14.969 tonnes. The Hypertruck Electric Range Extender (ERX) is also a heavy commercial vehicle in this class. Hyliion introduced the model last year and combined an electric drive with a generator powered by natural gas to charge the battery. The “all-electric long-distance drivetrain” (quote Hyliion) is said to be designed for a range of more than 1,000 miles, or 1,609 kilometres. While the Hypertruck ERX is powered exclusively by electric motors, the truck is by no means purely electric for the 1,000 miles, since the range extender relies on natural gas. Hyliion gives the purely electric range as being 40 kilometres.

Hyliion has not provided any information on the exact technical data of the drive. The electric motor, the inverters and the axles are said to be components from Dana. The first demo vehicles are delivered to customers this year, and Hyliion aims for higher numbers in 2022.