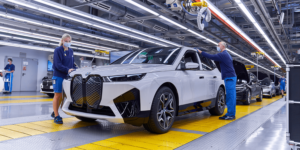 BMW wants to more than double the electrified vehicle output at its plant in German Dingolfing this year to over 40,000 vehicles, up from just about 20,000. The all-electric BMW iX will become the main driver behind the push.

The company presented the BMW iX last year and scheduled production to start this summer before the market launch in November. Next to the iX, BMW will also make two new PHEV versions of the 5 Series in Dingolfing. The plant is the Group’s largest vehicle production site in Europe and produced about 285,000 vehicles in 2019. Last year the number was lower due to the pandemic. Still, the plant manager Christoph Schröder stated their intention to increase again in terms of volume, despite difficult forecasts and the ongoing situation.

The expansion of the e-drive Centre also continued at full speed, he added. BMW had managed to open the ‘Competence Centre for E-Drive Production’ at Dingolfing last July, where they produce electric drive components for plug-in vehicles. By 2022, Dingolfing should manufacture drives for over half a million electrified vehicles per year.

“We continue to ramp up electromobility and set standards for the transformation of our industry,” CEO Oliver Zipse said at the time. BMW makes a mix of fully-electric vehicles, plug-in hybrids and models with a combustion engine on a single line, an approach Zipse called “the Power of Choice.” BMW considers Dingolfing a pioneer of said strategy in its latest announcement.

Once the BMW iX joins, the plant will be the first BMW production facility to offer all motor variants on one shared line. Plant manager Schröder considers the arrival of the electric car as a sign for the Group’s transformation. Subsequent generations of the BMW 7 Series and 5 Series will also benefit as BMW has already announced fully electric versions of both models to be built at the site over the next few years.

Update 04 July 2021: BMW has started series production of the all-electric BMW iX in Dingolfing. Milan Nedeljkovic, Board Member for Production at BMW AG: “The launch of the BMW iX* marks another milestone in our expansion of electrification and demonstrates our production network’s successful transformation towards electromobility and digitalisation.”

The BMW iX will be built at BMW’s production plant on an assembly line flexibly mixed with BMW 5 Series, 7 Series and 8 Series vehicles. In February, the carmaker had already announced that it would more than double the production of electrified vehicles at the Dingolfing plant this year from the current level of just under 20,000 to over 40,000 vehicles, to which the BMW iX will also contribute.