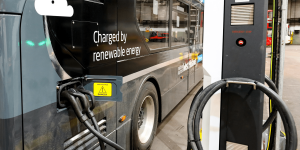 Major UK bus operator McGill’s has announced a £17.5million investment in all-electric buses. The company ordered a total of 35 e-buses from different suppliers to serve routes in the cities of Glasgow and Dundee in Scotland.

Alexander Dennis Limited are to supply twelve double-deck e-buses plus one single deck electric bus, all models the company builds in partnership with BYD. Pelican Yutong will supply 22 Yutong E12 vehicles to the firm.

McGill’s will also install charging infrastructure for its depots in Johnstone and Dundee.

The electric buses and infrastructure are to arrive in the second half of this year, in advance of the COP26 conference in Glasgow. McGill’s has received funding through the Scottish Ultra-Low Emission Bus Scheme.

The company also announced that it is in advanced talks with multiple partners to bring twelve hydrogen buses into the fleet in the next 12 months.

The new fleet purchase takes McGill’s capital investment to more than £50million since 2014. Around £40million has been spent on new vehicles.

Ralph Roberts, Chief Executive of McGill’s Group, expects them to “operate more electric buses than any other operator in Scotland” at the end of 2021.