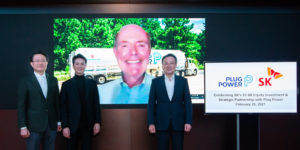 The South Korean SK Group, which recently acquired almost ten per cent of the shares in the US fuel cell specialist Plug Power, presented a long-term, multi-billion-dollar plan to enter the hydrogen economy even more comprehensively.

In early January, Plug Power announced that SK Group was investing with $1.5 billion and also planned to establish a joint venture in South Korea by 2022 to jointly provide fuel cell systems, hydrogen refuelling stations and electrolysers for the fast-growing Asian market. The announcement now published by SK Group even mentions an investment of 1.6 billion US dollars (equivalent to about 1.32 billion euros).

In parallel to the entry into Plug Power, the group now wants to expand its activities in the hydrogen sector. One of the reasons for this is that the South Korean government has defined hydrogen as one of the cornerstones of its future industrial policy and is promoting the development of a market for green hydrogen and the value chain accordingly. By 2040, a hydrogen economy worth 40 billion dollars is to be created in South Korea alone.

SK Group is a South Korean conglomerate that is primarily active in the energy, chemical and IT/semiconductor sectors. In connection with electromobility, the battery division SK Innovation has so far been the most prominent. However, the group also includes SK Energy, SK E&S, SK Global Chemical, SK Lubricants, SK Incheon Petrochem, SK Telecom and SK Communications.

Specifically, the SK Group’s holding company called SK Holdings announces that it has now established a Hydrogen Business Development Centre to lead the group’s long-term hydrogen roadmap. The centre is expected to bring together members of the energy divisions, including SK Innovation and SK E&S. “This new center will guide the companies’ transition into the production and distribution of hydrogen energy, including the creation of a mass production facility and investments in global business opportunities,” an accompanying press release said.

With the SK E&S division in particular, the group has a lot planned in the hydrogen sector. SK E&S has already established a hydrogen development business and committed to producing 30,000 tons of liquid hydrogen per year from 2023 and an additional 250,000 tons of “blue hydrogen” per year from 2025, the South Korean company wrote. SK E&S is expected to become a “global green energy company” that will expand its business to all areas of the hydrogen ecosystem, including production, distribution and sales. Among the group’s specific projects, SK E&S plans to develop all of SK Energy’s gas stations and truck stops into “green energy hubs” for H2 distribution.

SK Group estimates planned investment in its hydrogen activities at around $2.7 billion by 2025 (the equivalent of around €2.23 billion). Here, the roadmap goes beyond the use of H2 in the mobility sector. The group also wants to leverage potentials of the technology in the building and industrial sectors.

“The need for sustainable and green-focused energy solutions is crucial as we look at confronting the looming global climate crisis,” expresses Hyeongwook Choo, head of SK Holdings’ Hydrogen Business Development Center and CEO of SK E&S. “The establishment of SK’s Hydrogen Business Development Center, commitments to utilizing our companies’ facilities for green energy production and distribution, and the hydrogen-focused partnerships provide a solid foundation for us to make a substantial impact on the transition to a more sustainable future.”