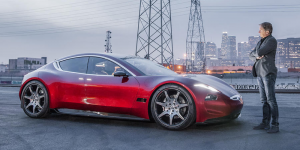 As recently as mid-2018, Fisker had stated that it would rely on specially developed solid-state batteries for the EMotion electric sedan from the very beginning. However, around one and a half years later, this decision was revised internally, as Henrik Fisker now said in an interview with The Verge.

“But we eventually came to a conclusion, I think it was probably the end of 2019, beginning of ‘20, I forget exactly, that solid-state batteries are still very, very far out, they’re not around the corner,” Fisker said in the interview.

Earlier, he had explained that several years of research had not yielded the desired result. “It’s kind of a technology where when you feel like you’re 90 per cent there, you’re almost there until you realise the last 10 per cent is much more difficult than the first 90,” Fisker said. “But you don’t really know that until you get up to the 90 per cent.” As they approached “fully understanding” the technology, he said, they found that it was much harder than expected – even given the euphoria of the earlier research successes.

Henrik Fisker himself now estimates that the car industry’s solid-state batteries’ volume production is still at least seven years away. Once a breakthrough was made in research, it would take three years to set up mass production and another three years for durability tests, Fisker says. When that realisation came, solid-state batteries were “completely dropped at that point,” Fisker said.

However, the company founder does not want to completely rule out the possibility of his company working on solid-state batteries again one day. “If we do, it would be something completely new,” Fisker said. “But the solid-state battery that we worked on, that just doesn’t have a future at this point in time in the near future.”

Fisker Inc’s first model, the Ocean electric SUV, is built by production partner Magna using conventional lithium-ion cells with liquid electrolyte – for Europe in Graz. In the summer of 2020, Fisker had announced its intention to launch four electric vehicle models by 2025. In addition to the Ocean electric SUV, this is to be a sports crossover on the same basis, and an electric sedan is also planned. The graphic still showed the silhouette of a pickup, which Fisker described at the time as a “lifestyle” pickup. Last week, Fisker announced its intention to build a “groundbreaking” electric car in a new segment together with Foxconn from 2023.