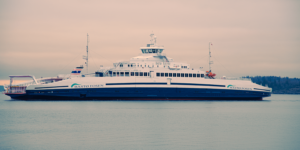 The world’s largest all-electric ferry yet has gone into service in Norway on a route across the Oslo Fjord. Bastø Electric is the first of three battery-powered ferries operated by the shipping company Bastø Fosen to enter Norwegian waters with more in the making in Turkey.

The Bastø Electric is 139.2-metre-long and 21-metre-wide and was built by the Turkish Sefine Shipyard and has room for 600 passengers and 200 cars or 24 trucks. The battery and fast-charging systems for all three ferries are supplied by Siemens Energy from the battery factory in Trondheim. Bastø Electric uses batteries with a capacity of 4.3 MWh. The fast-charging system has a capacity of 9 MW, according to the shipping company. When docking, the ferry is always “charged at lightning speed”.

The approximately ten-kilometre-long ferry route between Moss and Horten is Norway’s busiest ferry connection, according to Bastø Fosen. Annually, 3.8 million passengers and 1.8 million vehicles are transported on this route. “During 2022, emissions on this ferry route will be reduced by 75 per cent,” the shipping company says. Two other ferries are also to be converted from diesel to electric operation shortly. According to the company, each ferry docks and departs 20 to 24 times a day. The crossing takes around 30 minutes.

Unfortunately, the fast charging system for the ferry is not yet fully operational. Currently, the new electric ferry can only be charged in Horten. The charging connection in Moss is already under construction and will go into operation in the summer. Until then, the ferry will be operating in hybrid mode.