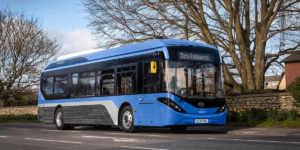 In Scotland, the transport company First Bus has ordered 22 Enviro200EV electric buses from the local manufacturer alliance BYD-ADL. Co-funded by the Scottish government, the electric buses shall enter service in time for the UN Climate Change Conference COP26 in Glasgow this November. First Bus committed to purchase no diesel buses after 2022 and to operate a fully zero-emission fleet by 2035.

Paul Davies, ADL President & Managing Director, called COP26 “a showcase of Britain’s commitment to fighting climate change, and First’s new electric buses will be a testament to the initiative taken by the transport group to achieve a zero-emission fleet by 2035.”

The company is already operating two BYD-ADL buses and have charging installed at a depot. Andrew Jarvis, Managing Director for First Bus in Scotland explains: “In January last year, we launched the city’s first electric buses on a commercial bus route since the 1960s and we are proud that we can now build upon this with another 22 fully electric vehicles, which will replace the oldest buses in our fleet to further improve air quality in the city of Glasgow.”

ADL will assemble the buses at its factory in Falkirk using BYD driveline and battery technology as usual. First Bus also reports this was to ensure the investment benefits the local economy in Scotland’s Central Belt.

First Bus are alone in gearing up for zero-emission transport ahead of the conference. McGill’s put in an order about a week ago, buying e-buses from BYD-ADL as well as Yutong as reported. They too received funding through the Scottish Ultra-Low Emission Bus Scheme.

Meanwhile in Japan and the US

Staying with the climate change conference, we may remember the Kyoto Protocol. The city of Kyoto issued a statement saying that it is seeking to electrify transport “in the same spirit”.

The first batch of four BYD J6 electric buses will be deployed on Kyoto’s sightseeing bus line as part of a five-year demo to promote electric public transport in Japan further. The partners claim this will become the country’s first loop line operated solely by electric buses. The J6 models can accommodate up to 29 people.

Depending on data gathered during the trial, Keihan Bus wants to add K8 electric buses by BYD gradually in the Kansai region, one of Japan’s key economic and industrial hubs. Kansai Electric Power, the second-largest electric power company in Japan, will install charging infrastructure and gather data on energy management.

BYD say they are no stranger to the country or city. Since K9 buses first began operating in Kyoto in 2015 and opened up the Japanese market, the brand’s buses have entered Okinawa, Fukushima, Iwate, Yamanashi, Tokyo, and Nagasaki, among other places in Japan over the past six years.

Lastly to the USA, where BYD also found a new customer, but not for buses. J & M Sanitation, a family business in the town of Kuna in the state of Idaho, has put two purely electric garbage trucks into service. J&M is the first company in Idaho to use electric refuse trucks and now operates two of only ten in North America, BYD says.

The BYD 8R trucks have a battery capacity of 295 kWh and are expected to last a full day. J&M Sanitation trucks run each weekday, each serving about 800 Kuna homes resulting in 1,065 lifts of the arm daily and approximately 18 tons of refuse collected. For the chassis with automated side-loader bodies, BYD teamed up with a refuse truck body manufacturer Amrep.