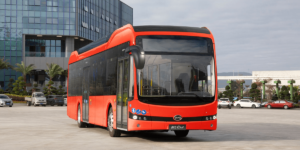 Currently the world’s largest electric bus maker, BYD says that the German public transport provider will be using the latest generation of BYD’s 12-metre low-floor bus with increased battery capacity (422 kWh). This version of the model, called eBus, was presented by BYD at Busworld 2019. The model is said to feature the new battery and a new air conditioning system, 6-in-1 controls, and BYD’s Fleetlink fleet management tool.

The two companies have signed a framework agreement to pave the way for “further orders in 2021”. No further details were provided here.

“This important order is indicative of the confidence that Deutsche Bahn places in our best-selling, and the latest generation, 12-metre product,” said BYD Europe Managing Director, Isbrand Ho, “which has also been rubberstamped by the framework agreement for the supply of eBuses later this year. Moreover, the order from such a high profile Public Transport Operator is acceptance of the BYD marque generally in the German bus market.”

This is BYD’s second e-bus order from Germany, having already handed over 22 vehicles to public transport operators in Gelsenkirchen and Bochum in October 2020. These vehicles ordered in 2019 are from the previous BYD generation.

The Chinese company has an electric bus plant in Hungary, and most of its European markets are served from the plant in Komárom. In December, the company announced that it plans to expand the Hungarian plant – from 200 vehicles per year to 1,000.

BYD has handed over five electric buses to Deutsche Bahn in Baden-Württemberg. When announcing the delivery, the Chinese manufacturer emphasised that the five vehicles drove from Oosterhout in the Netherlands to Ettlingen near Karlsruhe on their axles – and only needed one charging stop for the more than 500-kilometre route.

On paper, the 422 kWh mentioned above LFP battery should last 400 kilometres. However, Michael Lechelt, Head of Operational Fleet Management, DB Regio Bus, also praised the practical range in everyday use. “The vehicles have an impressively long range. Even with extreme temperatures during the winter and fully loaded, the vehicles will manage their routes. Drivers who have tested the buses have been very satisfied with regards to the riding experience, driving dynamics and driving characteristics.”