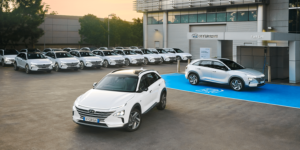 The introduction of the Hyundai NEXO hydrogen fuel cell cars has been in planning for quite some time. The project was delayed by both a lack of refuelling infrastructure as well as Covid-19 restrictions. The first publically available hydrogen refuelling station will open in Canberra this month with 700-bar rapid refuelling capability.

Hyundai Motor Company Australia Chief Executive Officer Jun Heo said: “As a co-founder of the Australian Hydrogen Council, Hyundai is proud of the work carried out to date, to help develop and grow a sustainable hydrogen industry in Australia.”

This NEXO fleet forms part of the South Korean company’s continuing work with stakeholders on the implementation of the science institute, CSIRO’s Hydrogen Road Map and the Australian Government’s National Hydrogen Strategy which is supposed to put Australia at the forefront of the global hydrogen industry by 2030.

Australia is gaining increasing attention for its enormous potential for the production and export of green hydrogen (by electrolysis, eliminating CO2 emissions from the production process). This is made possible by Australia’s vast potential sources of solar, wind and wave energy. This has not gone unnoticed by the continent’s neighbours in Japan and South Korea, both of which have made significant investments in hydrogen technology and are looking at viable import options for hydrogen. Like Germany, Korea and Japan have only limited potential for renewable energy. Australia, on the other hand, has these elements in abundance and other countries are increasingly looking towards Australia as a supplier of green hydrogen.