The ultracapacitor manufacturer Skeleton Technologies from Estonia has entered into a strategic partnership with the Japanese trading company Marubeni, which is also investing an undisclosed amount in Skeleton.

Skeleton Technologies has already closed a financing round of 41.3 million euros in autumn 2020. The company says that the aim of the new cooperation with Marubeni is to bring Skeleton’s new generation of ultracapacitors, also known as the ‘SuperBattery’, to the Asian automotive market, with a focus on electric vehicles and hydrogen transport.

Skeleton is collaborating with KIT for the SuperBattery’s technology. The research collaboration, announced in September 2020, will combine Skeleton’s patented ‘Curved Graphene’ carbon material with materials developed at KIT to create the SuperBattery. The battery is designed to enable the high performance and long life of ultracapacitors with a graphene battery. With its plant in Großröhrsdorf, Germany, Skeleton is also being funded by Germany as part of the second battery IPCEI.

The SuperBattery is supposed to be able to charge in only 15 seconds and “survive hundreds of thousands of deep discharge and charge cycles. In battery-electric cars, this battery could be used to supplement the lithium-ion battery. “SuperBattery can avoid typical oversizing of batteries and corresponding cooling systems, resulting in significantly lower costs and longer system life,” a Skeleton spokesperson said in September, explaining that the ‘SuperBattery’ essentially serves as a buffer for peak power loads for charging and discharging that are typically the most demanding tasks for current batteries. Graphene batteries are not suitable as primary traction batteries because of their lower energy density. Skeleton is talking about 60 Wh/kg for its development. 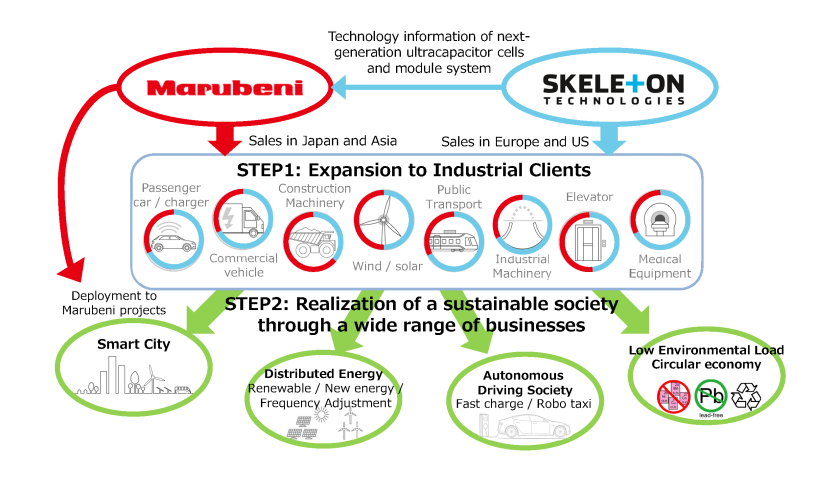 Beyond the sales cooperation, Skeleton and Marubeni want to work together on new applications for Curved Graphene. “Enabling carbon-neutral electrification is a key priority for Marubeni Corporation,” said Masayuki Omoto, COO of the Business Development Division at Marubeni. Taavi Madiberk, CEO and co-founder of Skeleton Technologies, added, “Our collaboration will drive adoption of our technology in the Asian automotive market in the near future, as costs will come down much faster than lithium-ion batteries.”

Marubeni is actually a trading conglomerate but has made contacts with the electric mobility industry in the past. In 2017, the company joined the Hydrogen Council and in 2018 signed a cooperation agreement concerning battery recycling with Northvolt. In January 2020, Marubeni began taking up a stake in the electric car startup Byton. Later, when Byton ran into financial difficulties, it was revealed that apparently due to the Corona pandemic, not all the money announced in the course of the C-Series financing had flowed to Byton. In the “relaunch” of Byton, there was no longer any talk of Marubeni participation.