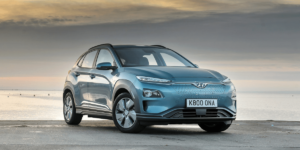 Hyundai has announced prices and specifications for two models to be launched in the UK. The updated Kona Electric is to launch at £30,125 including the plug-in grant, while the new Tucson PHEV is priced starting from £39,330.

Not much changed for the updated Kona Electric in technical terms, except for new charging options. Prices start from £30,125 (including the £3,000 Government PICG) or £297 p/m for SE Connect 39kWh, £359 p/m3 for Premium 64kWh. The 100 kW version has a 39.2 kWh battery and is still imported from South Korea. The 150-kW version built in the Czech Republic will keep its 64-kWh battery. As previously mentioned, the charging functions have been upgraded. Specifically, the 100-kW version is now also available with the three-phase 11-kW AC charger for a yet unknown extra charge. Hyundai specifies the charging time for this model as 3:25 hours, from 10 to 100 per cent; with the 7.2 kW charger, it would be five hours. The Kona with a 64-kWh battery is charged from 10 to 100 per cent in 5:30 hours with the 11-kW charger. Hyundai specifies the charging times at a rapid charging point at 47 minutes from 10 to 80 per cent (64 kWh) or 49 minutes (39.2 kWh)

Hyundai Motor UK has also announced the pricing and specification of the new Tucson Plug-in Hybrid, which is priced from £39,330. The hybrid SUV runs on a combination of a 1.6-litre gasoline engine coupled with a 66.9 kW electric motor and a battery with a capacity of 13.8 kWh. This gives the model a more powerful engine configuration than, for example, the Hyundai Ioniq PHEV or the Kia Niro PHEV (104 kW system output each). Hyundai places the electric range at “over 50 kilometres”, which can also be charged with the 7.2 kW onboard charger.

Two trim versions are available for the Tucson, namely ‘Premium’ and ‘Ultimate’, which aligns with the trims available on the Hyundai’s other hybrid variants. Priced from £39,330, the Tucson ‘Premium’ specifications include 18″ alloy wheels, LED front and rear lights, 10.25″ touchscreen satellite navigation and a 10.25″ driver’s supervision instrument cluster. The ‘Ultimate’ specification is from £42,030 and adds 19″ wheels, leather seat facings, panoramic glass sunroof and smart electric tailgate.