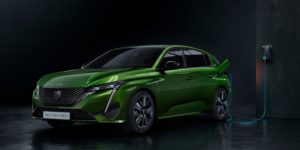 Peugeot has unveiled the next generation of its 308 compact car. The new 308 is based on further development of the Efficient Modular Platform (EMP2), which, according to PSA, makes it possible to “provide a complete range of electrified versions”.

However, for the time being, the “complete range” will only include hybrid electric variants. Two plug-in hybrids with front-wheel drive will be available at market launch: The Hybrid 180 and Hybrid 225 with the eponymous 180 and 225 hp system output (133 and 165 kW), respectively, each with an 81 kW electric motor and a 12.4 kWh battery for an electric range of around 60 kilometres. They differ mainly in the combustion engine, which produces 110 and 133 kW respectively. The Hybrid4 version known from other EMP2 models with a second electric motor on the rear axle is not announced in the announcement. It is possible, but not confirmed, that this version will follow at a later date.

Ex-works, the plug-in hybrids come with a 3.7 kW onboard charger, with a 7.4 kW charger available as an option. With the latter, a full charge takes a little less than two hours, with the standard 3.7 kW charger it is 3:50 hours. Peugeot specifies 7.05 hours for a full charge at a standard 8 amp socket. There is no optional DC charging option.

In its press release, the manufacturer does not comment on a possible battery-electric version of the new Peugeot 308 that is planned for a later date. Based on the EMP-2, PSA offers several BEVs with the familiar 100 kW drive, such as the Peugeot e-Traveller or e-Expert.

The model change is also accompanied by several other changes. At 4.36 metres, the 308 is eleven centimetres longer than its predecessor, and the model is also two centimetres lower at 1.44 metres. At the same time, the wheelbase has grown by 5.5 centimetres to 2.675 metres, which should offer more space, especially for passengers on the back seat. The luggage compartment holds 412 litres, with the rear seat backrests folded down the maximum is 1,323 litres.

At the front, in addition to the new radiator grille and the LED headlights (standard, LED matrix headlights optional), the new logo is striking. Instead of the stylised whole lion, Peugeot now shows a much more detailed lion’s head in its brand emblem. The pattern of the radiator grille further emphasises the new logo. At the rear, the 308 is strongly reminiscent of the design introduced on the smaller 208 – only one size larger.

In the interior, the French company is banking on the further development of the familiar i-cockpit. From the “Active Pack” equipment line onwards, the 308 has a ten-inch driver’s display instead of classic instruments. A ten-inch touchscreen on the centre console is part of the standard equipment; it is positioned slightly lower than the instrument cluster to be easier to reach. The new Peugeot i-Connect infotainment system is said to offer “a significant change in ergonomics, quality, design and technology”.

The new 308 is also to receive a number of assistance systems. A “Drive Assist 2.0” package is also to be offered from the end of 2021, offering adaptive cruise control with Stop&Go function (in conjunction with the EAT8 automatic transmission) and lane departure warning, as well as three new functions on lanes with separate lanes.

The 308 is due to be launched in the second half of the year. Peugeot does not yet mention prices for the model built in Mulhouse, France. The estate version 308 SW is to be presented in June.

Update 27 March 2020: Jérôme Micheron, Product Director of Peugeot, has just confirmed in an interview with Autocar that Peugeot is planning an all-electric version of the new Peugeot 308. Micheron said, “We’re launching the new 308 with petrol and diesel, we’ve already decided a roadmap in which we will launch MHEV and we also have a plan for an EV offer on the 308.” He explained: “We would rely on the existing EMP2 [platform for the electric 308], but in the Stellantis group we have several options to create electrification.”