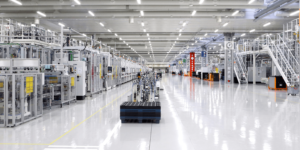 Finnish supplier Valmet Automotive has announced battery assembly in Germany. Battery systems are to be assembled in Kirchardt in Baden-Württemberg from 2022. The company already operates two similar plants in Finland.

The decision to locate the battery plant in Germany, as well as the specific site, was made against the backdrop that Valmet Automotive was recently contracted by a German automaker as a Tier 1 supplier for a battery program, the company said. “Part of this order is that, in the interests of conserving resources and avoiding unnecessary transport routes, battery production should take place in close proximity to the customer,” Valmet said.

Audi would therefore be an obvious choice, as the VW subsidiary operates a large vehicle plant in Neckarsulm. The site in Kirchardt is conveniently located near the A6 between Heilbronn and Sinsheim. As was previously announced, Audi manufactures the e-tron GT at the Böllinger Höfe factory, which is part of the Neckarsulm plant, but an electric model series for the main plant has not yet been announced. The Q6 e-tron based on the PPE is to be built at the main plant in Ingolstadt from 2022.

It would also be possible, but less likely, to supply Porsche and Mercedes in the Stuttgart area. However, Porsche has been working with Dräxlmaier on battery assembly (both for Taycan production in Zuffenhausen and for the PPE-based electric Macan in Leipzig). And Daimler also announced on Tuesday that in-house assembly of the battery systems for the EQS had begun at the Hedelfinden plant.


On-site, the company is moving into the area of a former printing plant. The hall with 11,500 square meters of floor space is already in place, and conversion work is scheduled to begin in the second quarter of 2021. Pre-series production of the highly automated battery manufacturing facility is scheduled to start in the first quarter of 2022.

However, the Kirchardt site – where 160 jobs are to be created – also makes sense for Valmet itself: the Heilbronn district in Bad Friedrichshall is also home to a battery test centre announced in 2019. In Weihenbronn (also in Baden-Württemberg), Valmet has been operating another Battery Test Center (BTC) since November 2020. The Finnish company had only announced in February that it would create new jobs in its development departments in Bad Friedrichshall and Munich.

“The decision to build our third battery factory in Germany is the next important step to establish Valmet Automotive as a tier-1 system supplier of battery systems and modules,” says Olaf Bongwald, CEO Valmet Automotive. “The Kirchardt site is perfect as it allows us to produce close to some of our important customers, but also to our engineering location and battery test center in Bad Friedrichshall.”

Kirchardt will then become the company’s third battery systems manufacturing facility. Valmet already operates a battery assembly plant in Salo, Finland. The second factory, which will be directly attached to Valmet Automotive’s car plant in Uusikaupunki, is under construction and production there is scheduled to start in the later half of 2021.