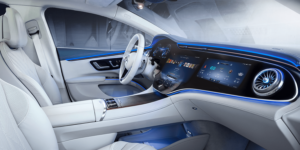 Mercedes-Benz has now published the first details and photos of the interior of its electric luxury sedan EQS. The world premiere of the model will take place on 15 April, but Mercedes is already giving a preview of how the ‘hyperscreen’ will be integrated into the cockpit.

The most striking element is undoubtedly the “MBUX Hyperscreen”; the screen arrangement that Mercedes had already presented individually several weeks ago. Now the 141-centimetre-wide panel can be seen in the car itself for the first time. Behind the three-dimensionally curved cover glass, the display with the driver’s information (12.3 inches), the large centre touchscreen (17.7 inches) and a smaller touchscreen on the passenger side (12.3 inches) are bundled.

The cover glass is manufactured using a special process to provide high break resistance as well as a distortion-free view across the entire width. In addition, a total of twelve actuators are installed under the touchscreens to provide haptic feedback. Mercedes calls the menu navigation ‘zero layer’. Both drivers and passengers should be able to select important functions directly on the central display without having to go through a menu level (“layer”).

In addition to the pictures of the optional Hyperscreen, Mercedes has also published images of the standard equipment. This features a tablet-like protruding display for driver information and a touchscreen on the centre console, reminiscent of the arrangement from the S-Class.

Like the Hyperscreen, a head-up display with augmented reality functions will also be available. 1.3 million small individual mirrors should be able to create an image in the driver’s field of vision that corresponds to a diagonal of 77 inches. Daimler claims that with the high display resolution, directions and instructions can be shown with an additional degree of accuracy.

Mercedes also went all-out in setting up the sound system, and customers are to be able to select different “sound worlds” in the drive to customise the driving sound in the interior. In conjunction with the optional Burmester surround system, for example, there are the “Silver Waves” and “Vivid Flux” sound worlds. Silver Waves is a sensual and clean sound. Vivid Flux is aimed at EV enthusiasts and is crystalline, synthetic and yet humanly warm,” Daimler describes the function in the announcement.

The world premiere of the EQS is scheduled for Thursday, 15 April. The EQS is to be launched on the market in August, at least in Europe. The production of the battery systems in the Hedelfingen plant section of the main Untertürkheim plant started a few days ago, the vehicle itself will be manufactured together with the S-Class in the new Factory 56 in Sindelfingen. Mercedes has not yet announced prices.