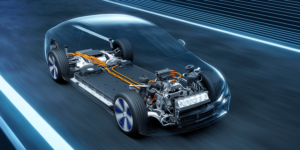 Shortly before the world premiere on 15 April 2021, Daimler has started battery production for its EV flagship Mercedes EQS. As part of the Untertürkheim site, the Hedelfingen plant section is responsible for battery system production for the EQS, followed by systems for the upcoming EQE model.

In Hedelfingen, Mercedes has so far produced transmissions for its combustion models. However, the assembly of the battery systems from purchased cells has been “seamlessly” integrated into the existing transmission production, according to the group.

The Hedelfingen battery factory has a production and logistics area of around 16,500 square metres. On a 300-metre-long production line, partly automated but also partly manual production steps are carried out at more than 70 stations. The battery systems assembled in Hedelfingen are then delivered to the Sindelfingen vehicle plant, where the two large S-Class and EQS saloons are manufactured in the upgraded ‘Factory 56’.

Pre-products from other Mercedes plants are used in the assembly process. As an example, the company cites the so-called ‘EE-Compartment’ for the intelligent integration of power electronics, which is assembled at the Mercedes-Benz site in Berlin-Marienfelde.

The EQS will be optionally equipped with modular battery layouts, which should enable different range and power spectrums. The battery will be fitted with a maximum of 12 modules. With a usable energy content of up to 108 kWh, the EQS should enable ranges of more than 700 kilometres according to WLTP.

Daimler also provides further details on the cell chemistry: the ‘high-performance’ cell chemistry of the EQS battery relies on NCM811 technology – i.e. the cathode contains nickel, cobalt and manganese in a ratio of 8:1:1. It is known that the EQS is to operate with a system voltage of 800 volts.

In the announcement, Daimler also refers to the EV campus, which is to be built in Untertürkheim after long negotiations. The ‘Drive Systems Campus’ will not only bundle the development of batteries and electric drive systems, but also test production start-ups. For this purpose, the Untertürkheim plant will receive a small-scale production facility for battery cells.

The Stuttgart company has also published some details about the charging concept for the EQS. Among other things, this includes uncomplicated charging via Plug & Charge. In the ‘Mercedes me charge’ app or in the MBUX system of the vehicle, users will be able to see whether the charging station supports automatic charging. In Japan, where the EQS is delivered with CHAdeMO charging system, the vehicle also supports bidirectional charging from the start. Daimler has not yet announced whether such Vehicle2Grid (V2G) or Vehicle2Home (V2H) functions will follow later in Europe.

“Our next all-electric model – the luxury sedan EQS – built on a dedicated electric platform is already in the starting blocks. The start of production of its high-performance battery systems in our plant in Stuttgart-Hedelfingen is therefore an important milestone,” says Markus Schäfer, Member of the Daimler Board of Management responsible for Research and Development and Member of the Mercedes-Benz Cars Board of Management responsible for Operations. “As part of the transformation of our company and our products, we are significantly expanding our battery competencies across the entire value chain. Thereby we continue to make efforts to help the next generation of batteries achieve a breakthrough even faster.”