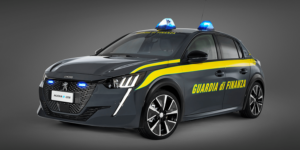 The Italian financial and customs police have ordered 30 Peugeot e-208s. A first electric car painted in the official colours of the “Guardia di Finanza” is on free loan and has already been handed over. The other electric cars will be rented on a long-term basis.

The electric motor (up to 100 kW) and the battery (50 kWh gross, 340 kilometres WLTP range) have not been changed, but the bodywork has: a blue light system has been installed on the roof, which should reduce the standard range somewhat. In addition, more blue lights have been integrated into the front grille and the rear window.

The interior has also been adapted: In addition to the control unit for the special signals, a radio and a tablet have been installed in the cockpit – the “Operations Centre”, as the French company wrote. But there is also a change in the rear seating arrangement: stronger reading lamps are to enable map reading at night, Peugeot says.

The Guardia di Finanza is subordinate to the Ministry of Economy and Finance and is mainly used to fight economic crime. The police force is thus responsible for offences such as tax evasion, moonlighting, money laundering and product piracy, but also areas such as terrorist financing or organised economic crime. In the case of defence, the Guardia di Finanza also takes on border security tasks – the latter, however, probably not with the e-208.