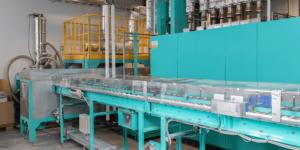 Battery Resourcers from Massachusetts holds the exclusive licence for an innovative closed-loop process that includes the recycling of materials from used batteries to the production of new batteries. Current processes are designed to recycle primarily cathode materials from nickel-manganese-cobalt oxide (NMC), nickel-cobalt-aluminium (NCA) and lithium-iron-phosphate (LFP) batteries. Battery Resourcers is apparently still working on a process to recover and purify graphite (from the anode).

According to Mike O’Kronley, CEO of Battery Resourcers, the company’s process is set to revolutionise the recycling of lithium-ion batteries. Previous processes are suitable for recovering metals contained in the batteries, but these cannot usually be further processed into new batteries. Battery Resourcers says it is close to being able to produce new active material from the recycled material on a larger scale for cathodes and later anodes. “We’re not just recovering the metals that are in the battery, which a lot of other recyclers are doing,” O’Kronley told media representatives. “We’re recovering those materials, and formulating brand new cathode active material, and also recovering and purifying the graphite active material. So those two active materials will be sold to a battery manufacturer and go right back into the new battery.”

O’Kronley continues: “Being able to convert scrap and end-of-life battery materials into finished, cathode active material that can be directly used in making new batteries drives increased profitability and stability for the lithium-ion battery ecosystem. Our investment partners share our vision and passion for scaling this revolutionary process to support the battery material supply chain.”

Participants in the funding round include Orbina Ventures, At One Ventures and TDK Ventures – and Trumpf Ventures, the capital offshoot of German mid-sized company Trumpf. In addition, Jaguar Land Rover has contributed an undisclosed sum through its investment company InMotion Ventures. O’Kronley declined to give details of the company’s new valuation.

The fresh capital in the new round of financing is expected to fund, among other things, the development of a commercial-scale processing plant capable of processing 10,000 tonnes of batteries annually. So far, the company operates a demonstration plant in Worcester, Massachusetts, and a facility in Novi, Michigan, where analytical testing and material characterisation are performed. So far, this has allowed Battery Resourcers to produce 15 tonnes of cathode material per year.

Jaguar Land Rover had announced a comprehensive electrification strategy under new CEO Thierry Bolloré in February. Jaguar is to become a pure EV brand from 2025, Land Rover from 2036. In the course of this, the British company also wants to invest heavily in the development of electrification solutions, connectivity technologies and sustainability.

Battery Resourcers has closed a new financing round – this time totalling 70 million dollars. Hitachi has now joined as a new investor. According to the company, the funds will flow into the commercialisation of the company’s production. In “response to the increased demand for sustainable battery production”, Battery Resourcers also wants to build more commercial plants, which are to be commissioned in the USA and Europe by the end of 2022.

The startup does not go into further detail about its expansion plans for Europe. Michael O’Kronley, CEO and head of Battery Resourcers, simply comments: “This new round of funding supports Battery Resourcers’ continued expansion in the US and extends it to Europe, enabling us to achieve our goal of a closed-loop battery supply chain.”