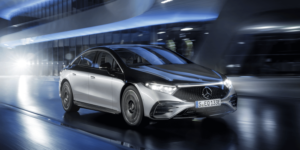 Mercedes has just presented the EQS, its first model based on Daimler’s in-house EVA electric platform. At the market launch, there will be two variants of the luxury electric car built in Sindelfingen, Germany. Daimler has not yet announced prices.

Over the past few weeks, Mercedes has been revealing tidbits of information about the EQS, the first pictures of the interior, the start of battery assembly in Hedelfingen and, last week, the first technical data such as the maximum possible WLTP range of 770 kilometres.

Mercedes has also long since revealed that there will be two variants of the EQS: The EQS 450+ and the EQS 580 4MATIC. The former is a 245 kW rear-wheel-drive model with the same 770-kilometre range. For the EQS 580 4MATIC – with all-wheel drive and one electric motor per axle – an output of 385 kW was mentioned, but no range.

Daimler has not mentioned this value in the announcement of the world premiere. A Mercedes spokesperson told our colleague Sebastian Schaal from our German publication electrive.net that the range of the EQS 580 4MATIC will be announced after final certification. Until then, we will have to make do with the provisional consumption data. WLTP consumption for this model is between 17.4 and 21.8 kWh/100km, depending on equipment, while for the EQS 450+ it is 15.7 – 20.4 kWh/100km. The standard consumption and the battery size of 107.8 kWh net do not directly indicate the WLTP range: Charging losses are included in the standard consumption, but not in the range.

The EQS 450+ has a maximum recuperation power of 186 kW, while the all-wheel-drive model can recuperate up to 290 kW. Depending on the variant, Mercedes is offering two battery sizes (400 volts) with 90 or 107.8 kWh of usable energy content are offered – one has ten, the other twelve modules. The difference is not only in the number of modules: In the large battery, the cells come from CATL, the cells from the smaller battery come from Farasis.

Daimler has not yet released technical data on the EQS with the 90 kWh battery. When asked, Christoph Starzynski, head of Mercedes-EQ, explained that they deliberately chose the large battery and the maximum range right from the get-go. “We are only at the beginning with the new platform,” says Starzynski. “The 90 kWh version will be announced for some markets towards the end of the year.”

An AMG version of the EQS has been speculated about for some time. In the course of the premiere, Daimler confirmed that plans are underway for a performance version with 560 kW (i.e. 761 hp). The German automaker has not yet revealed whether this will be launched under the AMG label or another designation.

The cobalt content in the battery cells has been reduced to ten per cent, the optimised active material consists of nickel, cobalt and manganese in a ratio of 8:1:1. By means of over-the-air updates, Daimler wants to keep the battery management software developed in-house up to date throughout the service life. The battery can also be preheated or cooled while driving to keep the battery at an optimal temperature.

An onboard charger for up to 22 kW AC charging power is to be offered as an additional option. The charging capacity ex-works is 11 kW. Mercedes-Benz puts the maximum DC output at fast-charging stations at up to 200 kW, and it should be possible to recharge the battery for up to 300 WLTP kilometres in 15 minutes (280 kilometres for the EQS 580 4MATIC). Charging to 80 per cent is said to take 31 minutes.

When it comes to charging, the EQ boss does not see the fact that the “electric flagship” EQS still relies on a 400-volt platform, while Hyundai-Kia brings 800-volt technology to the 40,000-euro segment. “We keep this plateau of 200 kW extremely long. We have great charging performance with 400 volts,” Starzynski says when asked by our colleague at electrive.net. “Since some markets also work with 400 volts as a priority, we decided on this at the market launch – from our point of view without sacrificing charging time.” He did add, however, that there was flexibility in the question of whether the 400 volts remains over the lifecycle.

The EQS also supports Plug & Charge. For European customers of the EQS, Mercedes still offers the ‘Ionity Unlimited’ package. This allows free charging at Ionity, which is a step up from the merely discounted prices with the EQC.

Another new feature of the EQS is navigation with ‘Electric Intelligence’. The route calculation including charging stops is familiar. A new feature of the EQS is a visualisation in the MBUX (Mercedes-Benz User Experience) infotainment system showing whether the available battery capacity is sufficient to return to the starting point without charging. Here, manually added charging stations along the route are given preference in the route calculation, while charging stations can be excluded. Drivers are also given a predictive calculation of the charging costs per charging stop.

With the EQS, Mercedes is not only introducing OTA updates, but also allows drivers to unlock ‘Functions on Demand’. According to Mercedes, when the EQS is launched to market, there will be two special driving programmes for young drivers and service personnel, along with small games and the demo programme called ‘The Best or Nothing’. It should also be possible to unlock the rear-axle steering with the larger steering angle of 10 degrees – the EQS has rear-axle steering ex-works, but this is limited to 4.5 degrees. With the 10 degrees, a turning circle of 10.9 metres should be possible, which is not bad for a car that is over five metres long. In addition to a classic purchase of individual functions, subscriptions, temporary activations and free test phases are also in planning.

Daimler has, of course, also revealed the series design of the EQS with its world premiere. When taking a look at the study shown in 2019, it becomes clear that the production car has adopted numerous design elements and, above all, the basic proportions with the very long wheelbase and the curved lines. With the premiere of the series vehicle, this is now slightly different: the headlights on the production EQS are somewhat more conventional, and the special rear lights in the Mercedes star design of the study have not made it into the series version. When viewed from the side, however, the EQS is very close to the original concept car.

The production model is 5.22 metres long. Here the US version differs slightly with the larger vehicles preferred in North America that has a length of 5.26 metres, (17,26 feet), is 1.93 metres wide (6.33 feet) and 1.51 metres high (4,95 feet). As reported, the cW value is 0.20, which according to Daimler, makes the EQS the most aerodynamic production car in the world. The EQS has conventional exterior mirrors. As the head of Mercedes-EQ Christoph Starzynski explains, that although this has disadvantages in terms of aerodynamics, he says that an exterior camera is apparently not worthwhile because of the additional energy consumption caused by external cameras.

The road-ready weight is 2.48 tonnes (450+) or 2.58 tonnes (580 4MATIC). The payload is up to 550 kilograms. The boot has a capacity of 610 litres. This increases to 1,770 litres when the back seats are folded down. The EQS does not have a frunk under the front bonnet simply because a HEPA filter is installed there. “Since we were able to achieve 99.96 per cent purified air in the interior, the HEPA filter has to be of a certain size,” says Starzynski.

Depending on the equipment, the EQS has up to 350 sensors, some of which are installed behind the black panel at the front. The environment sensor technology is also supposed to enable a remote parking assistant, with which the driver can park or unpark the car via smartphone. With the pre-equipment for the ‘Intelligent Park Pilot’, the EQS is prepared for Automated Valet Parking (AVP, SAE level 4). With the ‘Drive Pilot’, the EQS can drive on motorways at speeds of up to 60 km/h in a highly automated manner, here, not surprisingly, the laws in Germany (and the rest of the world) do not currently allow for more.

Daimler again highlights the 1.41-metre wide hyper screen in the interior. However, initial tests by journalists and bloggers gave mixed feedback on this front. Some of the graphics were said to be pixelated and not optimised for touchscreen operation, and some animations were described as jerky. It is not clear whether this is due to the software status of the pre-production vehicles or whether this is how it will be in series production. In addition, there was a stir about a tablet installed in the storage compartment between the rear seats. According to reports, it is a Samsung Galaxy Tab 4 from 2014. Daimler says that this is simply a product optimised to OEM requirements regarding temperature ranges and crash safety and not a seven-year-old device from consumer electronics.

“The EQS was developed to exceed the expectations of even our most demanding customers,” says Daimler boss Ola Källenius. “That’s exactly what a Mercedes has to achieve to earn the letter ‘S’ in its name. Because we don’t award that letter lightly.”

Mercedes plans to publish the prices at the sales launch in June.

Mercedes-Benz has announced the EQS will arrive in U.S. dealerships in autumn of 2021 and will start at $102,310. For the US launch, the EQS will be offered in three different trims with two different powertrains. Prices for the vehicle range top out at $108,510 on the EQS 450+ and $125,310 on the EQS 580 4MATIC, and both include a charging offer with Electrify America to charge on DC chargers for free for a period of two years.

The range is significantly lower than expected, as the automobile manufacturer had initially boasted that the vehicle would have a range of around 485 miles on the European WLTP testing cycle. While the number was expected to be lowered under the stricter EPA standards, it is unusual that the range would be more than 100 miles lower than expected.

With reporting by Seabatian Schaal