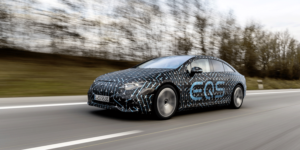 After Daimler had already started battery assembly for the EQS at the end of March and published photos of the interior, Mercedes-Benz now promises ranges of up to 770 kilometres for its luxury electric vehicle according to WLTP. Before the official data, the EQS range was put at “over 700 kilometres.” The low aerodynamic drag should contribute to this; according to Daimler, the cW value is 0.20.

The manufacturer also released more info on the drive: the rear-wheel motor is standard on the new platform so that all EQS will have an electric drivetrain (eATS) on the rear axle. Versions with 4MATIC will also have an eATS on the front axle. Mercedes particularly emphasizes the performance of the permanently excited synchronous machine (PSM) on the rear axle. The engineers installed two windings with three phases each, resulting in a “six-phase operation.” Besides, the stators have a pull-in winding supposed to strengthen the magnetic field.

The manufacturer plans a more powerful performance version as well, but there are no details yet. There has long been speculation that an AMG offshoot of the EQS like the Tesla Model S Plaid+ or the Audi e-tron S will have three motors.


Depending on the variant, Daimler will offer two battery sizes (400 volts) with 90 or 107.8 kWh of usable energy content – once ten, once twelve modules are installed. The cobalt content in the battery cells has been reduced to ten per cent, and the optimized active material consists of nickel, cobalt and manganese in a ratio of 8:1:1. Daimler intends to use over-the-air updates to keep the battery management software developed up to date throughout its service life. The battery can also be preheated or cooled while driving to keep the battery in the optimal temperature window.

An onboard charger for up to 22 kW AC charging power is to be available as an option. Daimler does not mention the charging power ex-works, but it is likely to be around 11 kW. Mercedes-Benz puts the maximum DC power at fast-charging stations at up to 200 kW, and electricity for up to 300 WLTP kilometres should be recharged in 15 minutes. The EQS also supports Plug & Charge.

Recuperation with up to 290 kW

There is also recuperation with the maximum output (probably for the all-wheel-drive models) said to be 290 kW – for the rear-wheel-drive versions, recuperation is limited by traction. Daimler sets deceleration at up to 3 m/s². In the recuperation system familiar from the EQC (the three stages can be selected via the shift paddles on the steering wheel) in ‘DAuto’ mode, the vehicle decelerates independently at up to 5 m/s² – said 3 m/s² via recuperation and 2 m/s² are decelerated automatically via the wheel brakes. The EQS is supposed to be able to break to a standstill via recuperation.

Mercedes also points out that the EQS drive is particularly quiet. Both eATS have an NVH (Noise, Vibration, Harshness) cover all around, and the eATS are also doubly decoupled via elastomer mounts. The main floor of the battery is not smooth but has corrugations to prevent vibrations and noise generation. The vehicle floor itself, on the other hand, is smooth.

Compared to the EQC’s route planning, the EQS system is said to have a new visualization of whether the available battery capacity is sufficient to drive back to the starting point without charging. Besides, drivers may manually add charging stations preferred in the route calculation, and charging stops suggested by the system can be excluded. ‘Active Range Monitoring’ recommends switching to Eco mode if there is a risk of not reaching the destination or charging station with the set settings.