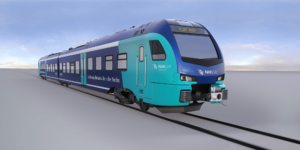 ABB has become the partner of choice for Stadler Germany, a train maker currently working to deliver battery-electric trains for regional and underground trains in Schleswig Holstein and Berlin. ABB will deliver traction converters and battery system to recharge electric locomotives running through the coastal state and on the underground in the German capital.

The Stadler trains of type ‘Flirt Akku’ will replace 55 diesel trains in the coastal German state from December 2022, as previously reported. Now ABB announces to have come on board to supply Stadler with traction converters and energy storage systems based on a lithium-ion battery.

“We are honoured to be the partner of choice for Stadler Germany and thankful for their trust in ABB’s innovative traction equipment, which is at the forefront of the transition towards more sustainable transportation,” said Edgar Keller, President of ABB’s Traction Division.

The order from Schleswig Holstein that is standing since 2019 is the single largest order for BEMUs (bi-mode electric multiple units) worldwide, according to ABB and for the local transport authority NAH.SH.

The new trains will operate in a partially electrified network, where the longest non-electrified section stretches up to 80 km, which were hitherto served by diesel trains. The traction batteries charge during operation in electrified sections and at selected locations of the route, ABB explains. Additionally, the energy storage system can be charged with a 400V or 1,000V depot supply. ABB adds that the traction converter architecture ensures that all the operating and charging modes can be realized without the need for additional power electronic equipment than what is required for an AC electric train.

The other order for the same system comes from the city of Berlin, where the local transit authority BVG wants to install ABB traction converters on more than 600 new underground cars. The move is long overdue and serves to overhaul 30 year old serving trains in the Berlin tube system. BB says its traction technology has already been proven very reliable in Stadler’s existing underground IK-type metro vehicles for BVG.

ABB will make the battery modules in Baden, Switzerland, and integrate them into energy storage systems at its drive technology plant in Minden, Germany.