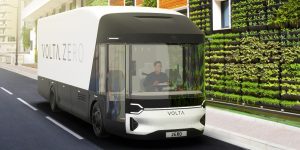 Swedish commercial vehicle startup Volta Trucks says it is considering producing its Volta Zero electric truck in Spain. One of a number of options is the former Nissan plant in Barcelona. The decision will then be made by a new CEO.

The Swedish startup Volta Trucks has officially expressed its interest in participating in the Decarbonisation Hub project in the former Nissan production facilities in Barcelona. Barcelona, however, is just one of several options currently being explored by Volta Trucks for manufacturing the electric truck, along with other potential locations in the UK and Europe.

“We have been investigating and evaluating a number of European manufacturing partners and facilities for many months and are now narrowing the field down to a small group of finalists,” says Kjell Waloen, chief technology officer at Volta Trucks. “Assembling the Volta Zero in Spain could be of interest to serve southern European cities for whom decarbonisation of commercial vehicles is becoming an ever-stronger priority.”

The decision will be made by a new CEO. Volta says that Rob Fowler has resigned for personal reasons, but will remain associated with Volta as a shareholder. Essa Al-Saleh, who was previously active as Chairman of the Board of Directors, will take over as CEO – in other words, he will move from the Board of Directors to the operational business. Before joining Volta in September 2020, Al-Saleh was CEO at logistics company Agility for 13 years, during which time Agility grew from 300 to 18,000 employees worldwide.

“At Agility Logistics, I had what I thought was a once-in-a-lifetime opportunity to scale a company into a truly global organisation,” says the new Volta CEO. “To be able to do it a second time is an exciting privilege.” He explained, “We are at a pivotal moment of a major transformation in the automotive industry. Volta Trucks is at the heart of this transformation, building the first full-electric large commercial vehicles to support the decarbonisation of logistics, improving city centre environments for all.”

Volta launched the Volta Zero prototype in September 2020. In February this year, Volta Trucks made huge leaps forward in North American production, putting in a “significant order” for Proterra batteries. Volta said that this completed its “strategic electric powertrain procurement”. At the beginning of February, it was announced that the US vehicle supplier Meritor will supply the electric drive to Volta Trucks. The 14Xe electric drive train is to be manufactured at Meritor’s plants in Asheville and Forest City in the US state of North Carolina starting in the summer.

The lure of the proximity to a potential battery hub in Barcelona for European production would indicate that the company is perhaps setting up both a US and European production eco-system in Europe too. In February this year, the transatlantic company said that trials with Volta Zero trucks are to be started with a few pre-series vehicles “with Europe’s largest logistics company” in the first half of 2021. The companies involved were not named specifically, but apparently include “some of the largest parcel delivery and logistics companies in Europe”.

Volta Trucks only started up in 2019 and has moved very fast, with offices in Sweden, France and the UK. The company says it is partnering “with a number of global leaders in the supply chain for the development and production of the Volta Zero.” With these latest announcements about the new factory location considerations and CEO, the electric commercial vehicle startup confirms that they expect that the first vehicles will be put into operation with customers in late 2021. This company is moving fast.