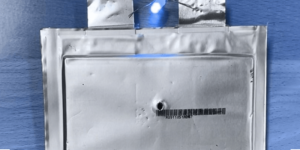 SVOLT, the battery cell manufacturer that emerged from the Chinese carmaker Great Wall, has announced new lithium-ion cells that will use safety technology from Soteria Battery Innovation Group (BIG) for the first time. The market launch of these cells is planned for the third quarter of 2021.

The technology eliminates the root cause of thermal runaway, in which the electrolyte in the cell ignites, potentially causing a fire, according to a statement from SVOLT. SVOLT wants to produce cells with NMC-811 chemistry using the materials licensed from Soteria BIG. So this is not about the company’s first cobalt-free battery cells, which will roll off the production line from June this year.

The Soteria Battery Innovation Group is based in the US state of South Carolina. The company, founded in 2017, describes itself as an open consortium of companies that wants to license its own developed materials and production methods to as many cell manufacturers as possible. According to Soteria, the technology is compatible with various chemistries such as NMC811, NMC523, NMC622, LFP and LCO. The goal is to convert lithium battery materials from the existing dangerous and heavy architecture to the safer and lighter Soteria architecture, Soteria BIG informs on its homepage. The consortium is aiming for a market share of 25 % by 2030. In addition to SVOLT, Soteria lists a whole range of companies as members on its website, including the battery manufacturers Saft, Xalt Energy, Customcells and Britishvolt, as well as Voith, Bosch and Rimac.

Soteria has published several videos on the technology itself. The consortium relies on an innovative paper-based separator material, which alone is supposed to withstand temperatures of up to 300 degrees and, supplemented by aramid fibres, up to 550 degrees. The material burns but does not melt, so it continues to fulfil its task of separating the anode and the cathode, they say. The anode and cathode themselves are covered with metallised plastic films (the anode uses aluminium, the cathode copper as a metallic additive). According to Soteria BIG, when exposed to excessive heat, the thin metallised plastic film melts in the area where it is affected and acts as a fuse in the area where the defect occurred. As a result, the battery continues to function even after damage.

According to SVOLT, the technology is able to improve energy density and weight in addition to the safety aspect. Specifically announced are optimised pouch cells of 5Ah, 10Ah, 20Ah and 60Ah, as well as prismatic 60Ah cells for all-electric vehicles and aircraft. “SVOLT has produced high-quality NMC 811 cells with our materials that have exceptional abuse tolerance,” expresses Carl Hu, CTO at Soteria BIG. “When Soteria Battery Innovation Group releases its safety certification standard, we expect SVOLT cells to be the first to pass it.” The background is that Soteria plans to develop “a set of aggressive testing standards” that will be “adopted in electronics, electric vehicles, energy storage and the entire lithium-ion battery industry”.

The fact that SVOLT is now expected to be the first group to implement the technology is related to the manufacturer’s early interest in the consortium. SVOLT is a “founding member of our consortium in China”, says Soteria BIG.

The Great Wall spin-off is aiming for a global production capacity of 200 GWh and seven R&D centres worldwide by 2025. Against this background, the company announced in February that it would expand production capacities in China. New factories are planned in Huzhou in China’s Zhejiang province and in Suining in Sichuan province, with annual capacities of 20 GWh each.

In November 2020, SVOLT had also announced its intention to build a battery cell factory with a capacity of 24 GWh in Germany. Cell production is to start by the end of 2o23, and modules and packs are also to be assembled from the battery cells at another site in Saarland. According to a 2020 announcement, the Chinese company wants to invest a total of up to two billion euros in the state for the two locations, and up to 2,000 jobs are to be created in the final expansion stage.