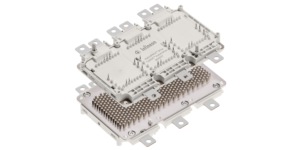 Infineon Technologies is launching a new power module with CoolSiC MOSFET technology for automotive applications. The use of silicon carbide instead of silicon ensures higher efficiency in converters in electric vehicles.

The technology is used, among others, in the Hyundai Ioniq 5. With the same space requirement, the power module called HybridPACK Drive CoolSiC in the e-drive train allows higher performance thanks to the switch to silicon carbide, according to Infineon.

Infineon speaks of up to 250 kW for the 1200-volt class, as well as “a longer range, a smaller battery size and an optimised system size at lower costs”. The module is available in two versions with different chip counts, so within the 1,200 V class, there is either a 400 A or a 200 A DC rated current version.

Infineon has optimised the module for traction converters in electric vehicles, especially in vehicles with 800-volt systems and a large battery capacity. The new SiC version follows the predecessor module with silicon EDT2 technology, which was first introduced in 2017 and offered a scalable power range of 100 to 180 kW within the 750 and 1200 V class. “Infineon says it is their market-leading power module “with a track record of more than one million units shipped for more than 20 electric vehicle platforms.”

In its announcement launching the new module, the group names Hyundai Motor Group, among others, as a customer. The South Korean company is launching vehicles with 800-volt technology on their new Electric Global Modular Platform (E-GMP) with the Hyundai Ioniq 5 and the Kia EV6. “By using traction inverters based on Infineon’s CoolSiC power module, we were able to increase the range of the vehicle by more than five per cent because of efficiency gains resulting from the lower losses of this SiC solution compared to Si-based solution,” Dr Jin-Hwan Jung, head of the Electrification Development Team at Hyundai Motor Group.

According to Infineon, the new SiC power module is already in production and will be available from June 2021.

Pure ETCR racing series to be FIA World Cup from 2022