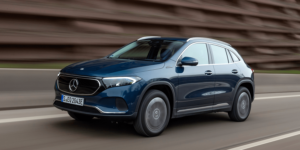 Mercedes-Benz now offers two additional versions of its EQA compact electric vehicle. Following the front-wheel-drive EQA 250 with 140 kW, which has been available for order since February, two all-wheel-drive variants can now also be ordered.

The motor on the front axle is the ASM known from the EQA 250. The rear axle is equipped with an “eATS” (Daimler’s abbreviation for the electric powertrain) with a newly developed PSM. Daimler does not specify the exact power distribution between the two e-machines, only the system output of 168 or 215 kW.

In the 4MATIC version installed in the EQA (and EQB), the power distribution between the two motors is regulated 100 times per second. For comparison: Daimler states 10,000 times per minute for the electric flagship EQS – i.e. 166 control processes per second. To optimise consumption, the rear e-motor is used as often as possible.

Later in the year, a “particularly long-range” version of the EQA is to follow – probably with a larger battery. However, Daimler has not yet provided any technical data.

List prices for the two all-wheel-drive versions in Germany start at 53,538.10 and 56,215.60 euros, respectively. This puts the netlist prices above 40,000 euros, which qualifies them for the reduced environmental bonus of 7,975 euros. The effective prices, taking into account the manufacturer’s and the government’s share, are then 45,443.10 and 48,515.60 euros, respectively.

The standard equipment of the two all-wheel-drive EQAs includes LED high-performance headlights, an electrically opening tailgate, comfort seats in the front and a reversing camera – and the MBUX system with navigation and “Electric Intelligence” route planning. To simplify configuration for the customer (and production for the manufacturer), there are three “practical pre-configured” packages – “Advanced”, Advanced-Plus” and “Premium”.

With the two all-wheel drives, Mercedes is probably also giving a preview of what is on offer with the EQB. The Swabians had shown the seven-seater SUV at the Shanghai motor show in April – with the 215 kW strong 350 4MATIC. At that time, it was said that in Europe, according to Daimler, customers “will have the choice right from the start between several models with front-wheel and all-wheel drive and various power levels, some with over 200 kW”. So far, only the EQB 250 and EQB 350 4MATIC were assumed here; in fact, the 168 kW all-wheel drive is likely to supplement the range here as well.