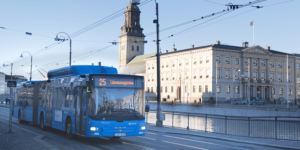 Keolis has been awarded a ten-year contract worth €150 million to run electric buses in Gothenburg, Sweden. The contract with the Västraffik transport association is due to take effect in June 2022 and involves replacing the city’s biogas and biodiesel buses.

As replacements, Gothenburg envisions the delivery of articulated electric buses. Keolis has yet to name the bus supplier and number of buses. The company, which operates fleets in Europe and the US, has been seen working with various bus makers such as Yutong, BYD or Solaris. Judging by the picture, the e-buses for Västraffik will be built by MAN.

Gothenburg is Sweden’s second-largest city, and Keolis expects the incoming electric bendy-buses to cover close to three million kilometres a year there. Västraffik will electrify two lines in the northeast of the city and says its network carries 17 million passengers a year.

The contract is part of Västraffik’s strategy of converting its city bus fleet into electric buses by 2030.

Keolis also agreed to adapt three depots for the maintenance and charging of the e-buses.

Keolis Sverige has been present in Sweden since 2003 and says it operates 1,600 fossil-free buses in four Swedish regions, covering 100 million kilometres every year. The company extended a contract with the capital Stockholm last July as reported. The company is also running a trial with autonomous electric vehicles in Stockholm using 5G technology. Keolis has over 4,500 employees in Sweden.

The partnership with Västraffik also builds on existing cooperation. Keolis operates three other bus networks for the transit companies, all running on alternative energies and, by the end of the year, will operate a fourth network linking Gothenburg to Borås. Since January 2021, Keolis has also been testing a Navya-built autonomous electric shuttle service in Gothenburg’s Lindholmen Industrial and Science park.