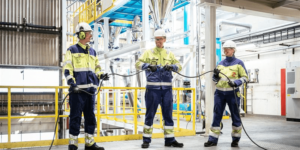 The Norwegian metal producer Elkem has founded an independent subsidiary under the name Vianode for the development and production of anode materials for electric car batteries. There is already one potential major customer.

In Kristiansand, Norway, Elkem has begun pilot production on an industrial scale for customers and started qualification processes with several battery cell manufacturers. Although Vianode was founded as a wholly-owned subsidiary of Elkem, the metal group is open to partners – they are “currently inviting external industrial and financial partners to participate”.

The investment decision for a large production facility is expected to be made before the end of 2021. “By establishing Vianode as a dedicated company for advanced battery materials, we ensure full focus on developing this business and progressing the large-scale battery plant towards a planned final investment decision in 2021,” says Michael Koenig, CEO of Elkem. This could be built at Herøya Industrial Park near Porsgrunn, located between Kristiansand and Oslo.

“The experiences from operating the industrial pilot will be key input in the work of building the large-scale plant for battery materials at Herøya Industrial Park, the first step in building a leading global advanced battery materials producer,” says Chris York, Vice President at Vianode.

Advanced, according to the company, also means more sustainable. Compared to conventional production of anode materials, Vianode aims to reduce emissions by more than 90 per cent. “Anode materials are one of the biggest greenhouse gas emitters in battery cell production today,” says Stian Madshus, Vice President and General Manager Europe at Vianode. However, Vianode does not give details about the process.

Elkem also did not provide any details about the exact investment budget. In the announcement, however, the company states that the investment decision for a large battery materials plant in Norway requires “competitive public support mechanisms and supportive government policies”. Vianoda has already received ten million kroner, the equivalent of one million euros, in funding from the government. In the coming months, “further applications related to the large-scale plant would be submitted” to the relevant authority.

Elkem had concluded a memorandum of understanding with Freyr last autumn for the supply of anode active materials for the future Freyr factory. The planned cell factory in Rana, Norway, is expected to have an annual capacity of 32 GWh.

Vianode has announced that it will rent another building at the Herøya Industrial Park in Porsgrunn. This will allow the production capacity there for graphite for use in e-car batteries to be increased by an additional 5,000 tonnes to a total of 60,000 tonnes per year.

A so-called “fast-track plant” is to be built in the building. Vianode says this is to “meet the strong demand from customers and shorten the time to market”. “We see that the market acceleration requires larger quantities of industrially produced materials sooner than expected,” says Chris York, Vice President of Vianode.