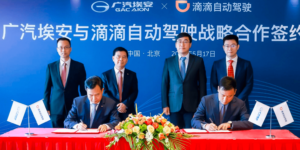 GAC Aion, the electric car offshoot of China’s GAC Group, has teamed up with ride-hailing company Didi Chuxing to develop an autonomous electric car. The plan is to develop a model for “large-scale commercial applications to accelerate mass production”.

A separate joint venture is to be founded for this purpose. Officially, there is talk of developing a New Energy Vehicle (NEV). But since GAC Aion has so far only built battery-electric cars – the milestone of the 100,000th Aion S produced was recently reached – likely, the autonomous vehicle from the Didi cooperation will not be a plug-in hybrid or a fuel cell car.

Didi will contribute its research and development capacities in hardware and software, while GAC Aion will contribute its know-how in-vehicle technology and production. According to a Didi release, the partners will work together on a drive-by-wire system, sensors for the self-driving system and system integration.

Didi and GAC Group’s collaboration already dates back to 2019, when it was about Didi fleet expansion and fleet management. The new cooperation with GAC Aion is not the only eMobility joint venture of the ride-hailing company. A joint venture with BAIC was already established in 2018, and a charging joint venture with BP in 2019. In autumn 2020, BYD and Didi unveiled an ID.3 clone.