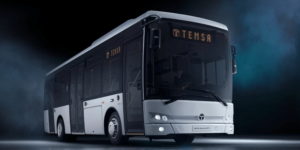 The Turkish bus manufacturer Temsa has received another order from Romania to supply ten electric buses to the city of Arad. Five nine-metre models and five twelve-metre long e-buses are expected to arrive next year.

The order includes the MD9 electriCity and the Avenue Electron type. In February, Temsa also booked an order for four Avenue Electron e-buses from the Romanian city of Buzau, bringing the number of e-buses on order in Romania to 14. Tolga Kaan Doğancıoğlu, the Temsa CEO, now considers the country “a quite valuable market for us.”

The recent statement does not disclose much background on the deal. Taking clues from past orders though, it is likely the city of Arad will also receive charging infrastructure alongside the bus models.

Temsa previously specified battery capacity options from 240 to 360 kWh for the Avenue Electron. The bus was to cover a 230-kilometre distance when fully charged. The manufacturers also said the bus travels 90 kilometres with a nine-minute charge.

The Avenue Electron debuted in Germany in 2018. In June 2019, the Turkish bus manufacturer also presented the MD9 electriCITY, this time in Stockholm. Forthwith, Temsa exported its first six electric buses to Sweden.

The near ten-metre model has 26 seats and can carry up to 59 people. The electric motor in the MD9 delivers 250 kW and the battery 230 kWh. Temsa also states in the datasheet that the 9.5-meter bus can be charged in two hours with a 150 kW charger and in six hours with a 50 kW charger. The manufacturer puts the range at 400 kilometres after an unspecified technology upgrade last year.

In January 2021, Temsa started producing battery packs for its e-buses at its plant in Adana. By 2025, the Turkish manufacturer wants to cover more than half of its bus volume with electric vehicles.

The ten electric buses on order in the town of Arad are managed through Temsa’s local dealership Anadolu Automobil Rom.