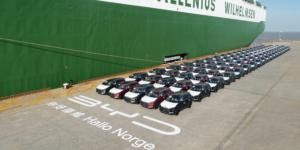 BYD has published its sales figures for May 2021. The share of electrified vehicles rose to 71 per cent – mainly due to the strong growth in hybrids. In addition, the first 100 electric Tang EVs were shipped to Norway.

First, the sales figures: BYD sold 32,800 electric vehicles and plug-in hybrids in May, about 190 per cent more than in the same month last year. 71 percent of BYD sales in May were electrified models. In more detail, BYD sold 18,711 pure electric passenger cars last month, 126 per cent more than in May 2020. In addition, there were 12,970 PHEV passenger cars, whose sales even increased by around 458 per cent and exceeded the 10,000 mark for the first time.

Sales of internal combustion vehicles declined across all segments. While combustion SUV sales fell by more than 41 per cent compared to May 2020, the decline was smaller for multi-purpose vehicles (MPVs) at -22.5 per cent and sedans at -4.3 per cent. However, as SUVs are the most important segment in absolute terms, the decline across all combustion engine series in May was -34.16 per cent.

In addition, as recently announced, BYD shipped the first 100 all-electric Tang model SUVs to Norway on Monday. The vehicles are a special European specification of the Tang EV; BYD had published the data for the current model year in March.

“Towards the end of the summer”, the vehicles are then expected to arrive at dealers in Norway. For sales in Norway, the Chinese company is known to be working with the car dealer RSA. Other vessels are to follow soon: BYD wants to deliver 1,500 electric Tang to RSA by the end of 2021.