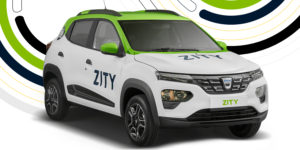 The electric car-sharing service Zity is beginning to integrate a total of 250 Dacia Spring electric cars into its fleets. Zity is jointly operated by Renault and Ferrovial, operating in Madrid and Paris. In Paris, Zity will launch the first 150 examples of the Dacia this month, with another 100 to follow in September.

The 250 Dacia Spring electric cars made by Renault’s Rumanian subsidiary Dacia, will not replace combustion engine vehicles but will replace as many Renault Zoe from the company’s Paris fleet. In Madrid, the introduction of the Dacia Spring is scheduled to begin in September 2021. Here, too, the electric Dacia will replace some of the company’s Renault Zoe. The electric car-sharing provider is not yet revealing exactly how many there will be in Madrid.

Zity currently operates 1,300 electric cars, 800 in Madrid and 500 in Paris. The business area in the French capital covers 105 square kilometres and covers both Paris and the neighbouring municipality of Clichy to the north. Zity says that users from Paris will be able to rent the new Spring via the service’s app starting in late June. In the future, Renault’s car-sharing fleets will also include the EZ-1 e-two-seater, as announced in January.

“Providing the safest, most convenient and flexible service to our users is the most important thing for Zity. But it is also a challenge for us as a company. That is why this model allows us to fulfil our promise to the user, but also allows us to achieve sustainability over time of the business itself,” said Javier Mateos, CEO of Zity. “The addition of the new Spring in our fleet is another step in achieving this goal and expanding our business to other markets where a model like ours has its place.”

The Dacia Spring is one of the most affordable electric cars to the European market to date. The model is available in Germany for prices starting at 10,920 euros. In addition to the private customer model, the manufacturer also has a special business model on offer, which is a variant optimised for car sharing, which is now being used by Zity, but also by major customer Leclerc. The French car rental company and supermarket operator ordered a total of 3,000 Dacia Spring Electric and 1,000 Renault Zoe in December 2020. The Dacia Spring car-sharing model features, among other things, very robust and wipe-clean seats. From Zity’s point of view, the electric car can also score points in car-sharing with its small cornering radius, its range of up to 305 kilometres according to WLTP, and the personalisation possibilities for connectivity services (Apple CarPlay and Android Auto).

Zity was founded by Renault and Ferrovial and first launched in Madrid in 2017. The electric car service was launched in Paris in May 2020 with 500 Renault Zoe, most of which Renault pulled from the Moov’in fleet previously operated there with ADA, a subsidiary of the Rousselet Group. Moov’in only lasted about a year and a half. The cooperation between Renault and ADA was apparently not harmonious. Renault then switched to the cooperation with the Spanish construction and infrastructure group Ferrovial that had already been tried and tested in Madrid.

Including reporting from Cora Werwitzke, Paris

San Francisco to get another 20 H2 fuel cell buses