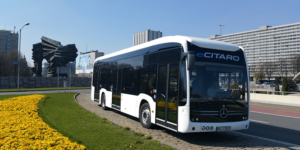 Before the end of this year, the Polish port city of Gdynia in the Bay of Gdansk is to receive 24 units of the Mercedes-Benz eCitaro from Daimler Buses. The company has received the first order for fully electric city buses from its European neighbour.

The order includes eight articulated and 16 solo buses that will be put into operation with the PKA Gdynia transport company.

Daimler says the city buses are equipped with “latest generation” lithium-ion batteries that can be charged by both plug-in and pantograph with a charging power of up to 300 kW. In addition to the plug-in connection available as standard, the eCitaro can also be charged with electricity via an additional plug-in connection at the rear of the vehicle. A preconditioning system ensures that both the battery and the passenger compartment are kept at the right temperature.

The buses are also equipped with driver assistance systems – such as an automatic braking assistant (Preventive Brake Assist) and a turn-off assistant (Sideguard Assist). The vehicles can be constantly monitored via a link to the Omniplus ON fleet management system. The system also indicates when service measures are needed.

According to Daimler, the transport network in Gdynia includes both buses and trolleybuses. The Mercedes-Benz eCitaros for Gdynia will be the first electric city buses in the entire Tricity metropolitan region.

Poland is one of the strongest markets in Eastern Europe for the German vehicle manufacturer. According to Artur Konarski, Managing Director of Daimler Buses in Poland, Daimler was the market leader in sales of combustion engine city buses in the country last year. “Now we’re really pleased to be in a position to deliver an order of 24 locally emission-free vehicles with an electric drive and that we’re making a contribution to sustainable public transport of the future in Poland,” he adds. But when it comes to electric buses, the competition is fierce. After all, many Polish cities rely on the domestic manufacturer Solaris, a company that also dominates the European electric bus market with around 20% of all European sales, whereby Daimler covered under 5% of European electric bus registrations in 2020. But as European transport companies increase their zero-emission stipulations and zero-emission fleets expand, Daimler has a chance to catch up.