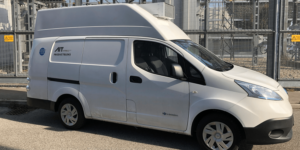 Voltia just got the license to operate its refrigerated electric van, a prototype that uses the Nissan e-NV200 XL van as its base, on roads in Austria. There is a gap in the market for fully electric cooling vans, and Voltia worked with high-tech companies and research partners to develop a green solution.

Voltia, a company based in Slovakia specialising in zero-emission deliveries, developed the e-transporter for two Austrian scientific climate protection projects: ZERO Logistics and CONSERVE. Austria’s Agency for promoting research (FFG) and the Klima & Energie Fond support the projects with a total of €3.3Mn.

As Voltia just received the operating permit, it will carry out full tests in Austria in the real world but has yet to name logistics partners. In a statement, Voltia only refers to refrigerated vehicles for clients from the food and pharmaceutical industry. It also points to a first real-world test with a prototype of the refrigerated Nissan e-NV200, which already happened with organic produce company Biohof Achleitner from Upper Austria. “We are extremely happy to be able to have combined the advantages of emission-free transport with natural refrigerant cooling technology,” said Juraj Ulehla, Voltia´s CEO.

Now that the vehicle is officially registered in Austria, more tests are likely being carried out until the projects end in Q4 this year.

In terms of technology, the e-van is insulated according to EU standards and legislations. Project partner Productbloks delivered the refrigeration technology, which is directly driven by the vehicle’s traction battery. This is crucial given that nearly all existing solutions for cooling vans are powered by diesel engines, so even if driven electrically, refrigeration units sometimes still rely on fuel and generators to chill the produce.

Peter Scheuermann, who leads the research group at AIT Austrian Institute of Technology, adds: “Electric cooling vans will play an important role shortly, especially for the city logistics and it is important to supply the cooling system directly from the high voltage battery to keep efficiency as high as possible.” His group supports the project in the system integration part with AIT´s EV power electronics.

What is more, the solution by Voltia and partners “has the highest volumetric efficiency with the lowest weight maximizing the payload of the vehicle,” claims Filip Kitanoski, Founder & CEO of Productbloks.

The potential could be huge. Voltia estimates, each year, around 60,000 new refrigerated light commercial vehicles are being sold in Europe. These are equipped with refrigeration units with high global warming potential factor of more than 1’300 CO2 equivalents having unacceptable direct and indirect emissions, says the company.

Voltia has been operating in Austria since 2015 as Voltia AT, when it leased its first electric van to a customer in Linz and, together with its sister company Greenway, completed an e-mobility tour there.

The company has production facilities in France, the United Kingdom and Slovakia and says it can produce up to 10,000 electric vehicles annually in these plants. In the UK in January, the Bevan Group signed a “landmark partnership agreement” with Voltia, under which it has been awarded a license to assemble and market Nissan’s NV-200 electric van in the converted form in Great Britain and Ireland.

In May 2020, Nissan included Voltia’s version of the Nissan eNV200 XL Voltia in its official global portfolio.

Whether the refrigerated electric van will find the same favour remains to be seen.