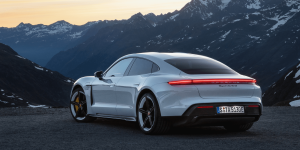 In the German publication Handelsblatt, Varta confirmed earlier news indicating that the company had found an automotive client with Porsche, which is not entirely unexpected. When presenting the novel battery cells two months ago, Varta specified these for use as a booster in premium and sports vehicles.

For Porsche, this means allowing to electrify the Taycan and 911 series further and to move beyond the scope of the Cellforce joint venture, which the company confirmed this Monday together with Customcells. The JV will concentrate on high-performance batteries for motorsports, not series vehicles, using a silicon anode and operate a production facility with a capacity of at least 100 MWh per year. According to the partners, the capacity corresponds to high-performance battery cells for 1,000 vehicles, with production likely to be located in Tübingen, Germany.

Porsche usually buys battery cells for series models such as the Taycan or the upcoming battery-electric Macan based on the PPE platform from external suppliers such as LG Energy Solution. Dräxlmaier, located near the vehicle plants, then assembles the packs for integration into the Porsche vehicles.

The exact scope of the Porsche contract with Varta is not yet clear, since the application in the 911 or new Taycan comes from an educated guess from industry insiders. Varta says that all cell attributes speak for sports cars, including a particularly low internal resistance, meaning the cell would heat up to only 34 degrees in six minutes during a charging process. Porsche has had its eye on ultra-rapid charging from the start and was the first to introduce an 800-Volt architecture, starting with the Taycan.

However, using the new cells may take a while. Varta is just working on a pilot line in Ellwangen, Germany, set to start production later this year and left open when it would begin mass-production.

That being said, the company was confident it would be able to scale up quickly and reliably. As Varta CTO Rainer Hald explained in April, they could transfer a lot of know-how from the ‘CoinPower’ cells – a round cell which, “in contrast to the 21700, the height is less than the diameter,” Hald said before pointing out that “the winding process and other manufacturing steps are very similar.” Since the production process is in the company’s own hands and many machines and tools are developed in-house, production can be ramped up quickly. In an earlier interview, CEO Schein had held out the prospect of 2024.