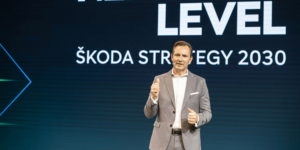 The Czech Volkswagen subsidiary Skoda has presented its new corporate strategy until 2030. The most important key statement regarding electric mobility: Skoda confirms at least three more purely electric models by the end of the decade.

In its new roadmap “Next Level – Skoda Strategy 2030”, the carmaker specifies that these three models will be positioned below the Enyaq iV in terms of price and size. With a length of just under 4.7 metres, the latter is a medium-sized electric SUV. The announcement of smaller electric vehicle models fits in with the Czech company’s general prioritisation of expanding their model portfolio in the direction of entry-level segments. Essentially, Skoda wants to “reduce the complexity of the range by 40 per cent in the medium term by gradually electrifying the model range”. In plain language, this means that the variety of internal combustion models will inevitably decrease.

In its new roadmap, the brand has now announced its intention to achieve a sales share of fully electric models in Europe of 50 to 70 per cent by 2030, depending on market developments. This is lower than the expectations of its sister company VW, where the board of directors is aiming for a share of purely electric cars in European sales of over 70 per cent by 2030.

Skoda is also working with partners to develop its home country, the Czech Republic, into an electromobility hub. Specifically, all three of Skoda’s Czech plants in Mladá Boleslav, Kvasiny and Vrchlabí are to produce EV components or electric vehicles by 2030. In addition, the Czech car manufacturer wants to work together with partners to build a stable supplier structure for electric mobility.

Currently, Skoda is already producing high-voltage traction batteries for the plug-in hybrid models Superb iV and Octavia iV as well as for models of other group brands in the Czech Republic. At the beginning of next year, production of MEB battery systems will also start in Mladá Boleslav for the Enyaq iV.

The other targets of the “Next Level – Skoda Strategy 2030” presented by CEO Thomas Schäfer are dedicated to more general topics. For example, the Czech car manufacturer aims to become one of the five best-selling brands in Europe by 2030 and to become the leading European brand in the growth regions of India, Russia and North Africa. The company has responsibility for these regions within the Volkswagen Group.

The company is also continuing to expand its virtual showroom concept – with the goal of selling one in five Skoda cars online by 2025. In Belgium, the Netherlands, Poland and the Czech Republic, customers can already take this option.

Finally, Skoda is taking steps to sharpen its environmental goals. For example, the carmaker aims to reduce its fleet emissions by more than 50 per cent compared to 2020 and to produce its vehicles in a CO2-neutral way in all Czech and Indian plants from 2030. In Vrchlabí, CO2-neutral production has already been underway since the end of last year, the company notes.

Skoda has been part of the Volkswagen Group for 30 years, maintains the above-mentioned three sites in the Czech Republic and also manufactures in China, Russia, Slovakia and India, primarily through Group partnerships, and in Ukraine with a local partner. Around 42,000 people are employed by the brand worldwide.