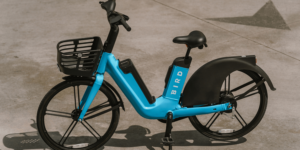 The kick-scooter rental company Bird is entering the sharing business with e-bikes. The provider will initially launch the Bird Bike this year in “select cities” in North America, and Italy, Spain, Germany, Ireland, and France in Europe.

“Cities and riders are best served by efficient, collaborative transportation networks, not walled gardens,” said VanderZanden, founder and CEO of Bird. “Bird’s vision of smart, responsible bike sharing is being able to provide the best shared bikes and operations when cities need them, and having the foresight to offer the best support and multimodal integrations when they don’t.”

The electric bike on offer with Bird can reach up to 25 km/h. The range is said to be up to 90 kilometers. The Bird Bike has been developed with a focus on safety and durability. The robust aluminum frame alone 34 kg. Bird says that their e-bike is “an intelligent, networked vehicle that complements existing urban transport networks.” Onboard diagnostics are said to automatically monitor and report the Bird Bike’s condition. With geofence technology, Bird can slow down or even stop the engine in certain areas. This is joined by a digital display with voice prompts. It also has a storage basket on the front.

Electric bikes have seen a surge of interest in the last couple of years, especially in light of the global pandemic. Even though electric bike sales have increased exponentially, electric scooters have too. This means it’s not always possible to get parts and micromobility industries are suffering supply shortages. Bird points out that this means that those who want to make the transition from fossil-fuelled vehicles to electric scooters and bikes cannot always do so. Micromobility sharing solutions enable that shift, Bird says.

Bird says it currently operates electric kick-scooters in more than 250 cities worldwide and will now be expanding its offerings with the bike-sharing service. The shared-mobility provider based in Santa Monica, California says their service will initially launch in “select cities” in North America, Italy, Spain, Germany, Ireland, and France, but are not yet naming the individual cities.

In addition, Bird had just recently unveiled its new electric kick-scooter, the Bird Three. What the company calls its micro-EV, the battery is built to outlast the scooter, with a minimum of 14,000 miles and up to a 20,000-mile lifespan, likely to be longer than the 24- to the 36-month lifespan of the entire vehicle, Rushforth said. In terms of differences to the last model, the Bird Three scooter has a longer wheelbase, a dual-sensor throttle, and a “triple braking system” with dual independent handbrakes. The claims that the Bird Three “autonomous emergency braking” system is an industry-first.

“E-scooters have put micro-mobility at the center of green transportation efforts in cities and have provided more than 150 million zero-emission rides to date,” said Travis VanderZanden. “We are launching our shared Bird Bike and Smart Bikeshare platform to meet the rapidly growing demand from users and cities for more sustainable transportation options. At the same time, we’re expanding our serviceable target market by 5 billion rides per year.”

Bird also plans to go public on the New York Stock Exchange starting in the third quarter of 2021 through a merger with Switchback II Corporation, for a so-called SPAC deal for quicker entry.

bird.co, and information via email, The Verge (Bird Three, IPO)