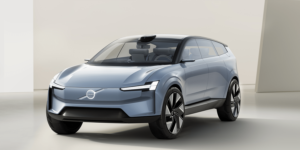 Volvo Cars has published details of its future technology roadmap. The Swedish company owned by Geely says that it will focus on range and fast charging for the next generation of its fully electric cars.

In the short term, Volvo Cars plans to increase the energy density of battery cells by up to 50 per cent compared to today as part of its cooperation with Northvolt. Volvo does not make it clear whether this will be the case with the second generation of its electric cars, only that a longer range and faster charging times will be achieved by “improving lithium-ion battery technology on its forthcoming second generation of electric cars, starting with the company’s first SUV.”

By the third generation of electric cars in the middle of this decade, Volvo Cars plans to further improve range and integrate the battery pack into the floor of the car. Here, the cell structure itself should fortify the overall vehicle stiffness and improve efficiency. By this time, current charging times are expected to be cut nearly in half owing to improvements in battery technology, software and fast-charging technology.

Henrik Green, chief technology officer. “By simplifying the design and integration of our battery cells, we can reduce weight and maximise space, allowing for considerable improvements in battery capacity, range and charging times.” Over the course of the decade, the manufacturer aims to crack the 1000 Wh/l energy density milestone to achieve 1,000 km of real-world range.

With the all-electric successor to the XC90, bidirectional charging is to be possible for the first time at Volvo Cars. This allows vehicles to offload energy to balance grids by charging at off-peak times and powering homes at peak times, for example.

Recycling and reuse of batteries, sourcing of materials

Volvo Cars says it has a clear strategy to further reduce the carbon impact of batteries by remanufacturing or reusing batteries, without going into further details only that it is “investigating potential second-life applications, such as energy storage”.

At the same time, batteries from Volvo Cars that have reached the end of their lifespan are to be recycled at authorised recyclers that are able to offer closed-loop recycling of critical materials for use in future batteries. Volvo Car Group’s says that its planned partnership with Northvolt also raises the possibility of utilising their established recycling operations. Although it does not sound entirely concrete yet, as a rapidly growing company Northvolt has put considerable effort and strategic planning into recycling capacities and the reuse of battery materials. This partnership is clearly incredibly important to Volvo Cars, as the company writes “The collaboration with Northvolt is key to Volvo Cars’ ambition to become a leader in the premium electric car segment and sell only pure electric vehicles by 2030.”

Volvo Cars reasserted its commitment to using blockchain for the responsible sourcing of batteries, saying that this will now include a wider use of blockchain technology without giving specific details. Volvo began with the use of blockchain technology to track the source of cobalt used in its electric vehicles in 2019. Then in 2020, the company invested in Circulor, a British blockchain specialist so that the Swedish car manufacturer could make the origin of raw materials more transparent in future. According to Volvo, Circulor’s technology – developed in cooperation with CATL and LG Chem – was already being used in its battery supply chain. The aim of the investment in Ciculor was to expand the range of traceable materials, but also to use blockchain technology for other areas, for example, to reduce the CO2 footprint. In May this year, Volvo announced that its subsidiary Polestar will use Circulor to achieve Polestar’s goal of building a carbon-neutral car by 2030.

Electric car production in the USA

In terms of Volvo’s electric ambitions, just yesterday Volvo Cars announced that it will convert its Ridgeville plant in the US state of South Carolina into an all-electric car production facility. The company says that here, the fully electric cars “of the new generation will be built” before Europe and China.

Audi to switch to agency sales model in 2023