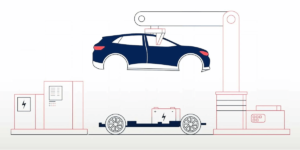 Hydrovolt has started construction of a battery recycling plant in Fredrikstad, Norway. The newly founded joint venture between the Swedish battery manufacturer Northvolt and the Norwegian aluminium producer Norsk Hydro says the plant will be operational at the end of 2021.

The new Norwegian company says that the plant’s initial recycling capacity is expected to be 8,000 tonnes of batteries per year, but expansion is possible. Hydro and Northvolt are jointly investing 120 million Norwegian kroner (the equivalent of about 11.7 million euros) in the plant, but will not operate it themselves: BatteriRetur, a Norwegian company located next to the future recycling plant, will supply the spent batteries in future and also take over the operation of the plant. Once the batteries have been crushed and dismantled, the aluminium from the used batteries will be recycled and reused by Hydro, while the “black mass” containing lithium, manganese, nickel and cobalt will either be reused in Northvolt’s battery production or sold to other parties.

According to the initiators, the recycling plant in Fredrikstad is to become one of the most technologically advanced of its kind, which also involves operating entirely with renewable energy and a high degree of automation. In addition to batteries from electric vehicles, the founding companies say there are plans to process other types of batteries from all over Europe at a later stage, for example from the marine sector, the companies say.

“Norway has long been a global leader in electric car adoption. At the start of 2021, we became the first country in the world in which over half of all new cars sold are electric. We should therefore also aim to be world-leading in recycling the used car batteries when the electric cars reach their end-of-life,” says Hydrovolt CEO Fredrik Andresen.

Arvid Moss, Executive Vice President for Energy and Corporate Development in Hydro says: “We are laying the foundations for a circular supply chain for batteries in Europe.”

Hydro and Northvolt established Hydrovolt in the summer of 2020 with the aim of pushing the recycling of battery materials and aluminium in the Norwegian electric vehicle market. The joint venture also has government support: in November 2020, the Norwegian government agency Enova promised Hydrovolt a grant of 43.5 million Norwegian kroner, the equivalent of a good 4.2 million euros.