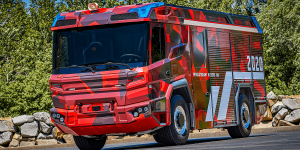 Volvo Penta has started production of electric drives for the series version of Rosenbauer’s RT fire engine. This includes the electric motors and an Active Cooling Unit (ACU) based on a 600-volt system.

Two electric motors provide 350 kW of drive power for the RT fire engine (short for Revolutionary Technology), the electricity comes from a high-voltage battery with 100 kWh or from a diesel-powered range extender from BMW – a three-litre in-line six-cylinder. According to Rosenbauer, this is intended to enable “continuous operation of the vehicle in driving and operational situations”.

The Swedish company has now announced that they will supply Rosenbauer with a total of four electric machines per vehicle: two for the drive, one as a generator for the range extender and one for electric drives for the fire-fighting equipment. The pump for the extinguishing foam is mentioned here as an example.

Volvo Penta says that the challenge is to operate all four machines in parallel, which is why the company’s engineers have developed a new type of system. This includes the Active Cooling Unit (ACU), which operates with 600 volts instead of the usual 24 volts. This became necessary, among other things, because of the compact dimensions available in the urban fire-fighting vehicle that was developed from scratch. With the powerful 600-volt unit, the ACU can not only cool the batteries, but also provide cooling capacity for other components in the vehicle.

Volvo Penta manufactures the ACU and the electric powertrain at its Vara plant in Sweden. All components are also supplied with the latest software there, so that installation in the vehicle should be as simple as possible for Rosenbauer.

“When it comes to developing new technologies, like electromobility, we see our customers as our biggest asset,” says Giorgio Paris, President of Volvo Penta Industrial. “By working closely on different applications and in an array of sectors we can develop solutions – in a stepwise approach – that are reliable, safe, and create value, with the aim to bring an electromobility platform to our customers.”