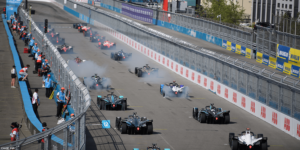 In the tenth round of the season on Saturday, Günther in his BMW i Andretti was only able to take the lead shortly before the end: When two-time champion Jean-Eric Vergne in his DS Techeetah overtook leader Nick Cassidy in the Envision Virgin, both were carried wide in the tight hairpin – leaving the inside lane free for Günther. Subsequently, Audi works driver Lucas di Grassi overtook Cassidy in the customer Audi and finished third.

In Sunday’s race in New York, Jaguar driver Sam Bird came out on top. The Briton and his team-mate Mitch Evans (New Zealand) controlled the race, only Cassidy could keep up with Bird and his compatriot. However, after a small driving mistake, Evans touched the wall and due to the damage to a Jaguar, he still dropped out of the points. After narrowly missing the podium on Saturday, Cassidy finished second, with DS Techeetah driver Antonio Felix da Costa third.

The two Porsches of Wehrlein and Lotterer finished fourth and fifth, followed by Mahindra driver Alexander Sims and Norman Nato in the Venturi. Saturday’s winner Günther was tenth. Audi drivers Rast and di Grassi came away empty-handed on Sunday, finishing 20th and 14th respectively. Championship leader Mortara was also unable to score any points after a collision and leaves New York in only fourth place in the championship.

With his victory in Sunday’s race and the three extra points for pole position, Bird now leads the Formula E season, which is being staged as a world championship for the first time, with 81 points with three races to go. Last year’s champion da Costa is second, tied on points with Robin Frijns in the customer Audi from Envision Virgin. The best German in the championship is Audi driver René Rast with 61 points in seventh place, but Porsche driver Pascal Wehrlein is only one point behind.

It was a weekend to forget for Mercedes: Not only did Mortara lose the championship lead in the customer team, but the works team with Nyck de Vries and Stoffel Vandoorne also failed to score any points in either race. After a very strong start to the season with 105 points from the first five races, there were no points in five of the last six races. As a result, Mercedes EQ has dropped to fifth in the team standings, but is still ahead of BMW i Andretti and the Tag Heuer Porsche team. The Team Championship is led by the Audi customer team Envision Virgin (146 points) ahead of DS Techeetah (144), Jaguar (141) and Audi (115).